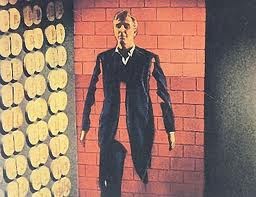 4D MAN, one of three sci-fi films directed in close succession by Irwin S. Yeaworth Jr,, is a good deal more complex than his other two films, the classic monster-film THE BLOB and the amiable "dumb fun" flick DINOSAURUS! 4D MAN has an intellectual rigor reminiscent of the best Jack Arnold sci-fi flicks of the same period, but this rigor doesn't seem to be present in other works by Yeaworth. Writer Jack H. Harris provided the basic idea for the film, but apparently didn't contribute to the script, though some psychological aspects are not unlike those of Harris' only writer-director project, the 1966 farce UNKISSED BRIDE. Of the two writers, one only has about four credits (including THE BLOB) while the other worked largely on westerns. I suppose I should regard 4D MAN as the result of a unique gestalt of talents and let it go at that.

In contrast to THE BLOB, where an inhuman monster was in the narrative forefront most of the time, most of 4D MAN's screen-time is devoted to the human conflict that creates the monster. Scenes of the "4D Man" passing unharmed through solid walls and draining victims of their life-force probably comprise less than twenty minutes all told, as the narrative concentrates more fully on the fraternal conflict between two scientist-brothers, Scott Nelson (Robert Lansing) and Tony Nelson (James Congdon), with the side-item of Linda (Lee Meriwether), the woman who comes between them.

Nothing is ever said about the parents of the two brothers, but Scott, the seemingly responsible older brother, takes a quasi-paternal air toward young Tony. This condescension seems justified, in that Tony's first accomplishment on screen consists of blowing up someone else's laboratory. Because that feat puts Tony out of work, he shows up at the physics lab where Scott works, implicitly looking for a handout. Scott agrees to let Tony work for him, though it soon comes out that Scott's project-- to produce an impenetrable metal, "cargonite"-- is one for which Scott receives no public renown thanks to his credit-hog boss Doctor Carson. Even before Linda enters the picture, the battle lines are drawn. Scott is the practical brother who stays employed at the cost of giving in to an egotistical supervisor. Tony is the more daring, charismatic brother who takes chances and so gets booted out of jobs. One guess which brother seems more romantically intriguing to Linda, the lady scientist who's worked alongside Scott for years.

Shortly after Scott introduces Linda and Tony, Scott mentions to Tony that he plans to ask Linda to marry him. But since Linda evinces no more emotion toward Scott than professional admiration, it's clear that long before Tony arrives, Scott's let the proverbial grass grow under his feet. Later, long after Linda and Tony have become romantic, Scott tries belately to woo Linda only to be told that she believes he only thinks he loves her out of "habit." And though the character isn't significantly older than the lady scientist (he states his age as "32," roughly the same age as the actor's in 1959), it's evident that Linda only admires Scott in the distanced sense of a mentor, possibly even a father-figure. This is made ironic by a later sequence when she takes a slightly motherly aspect toward Tony (who responds with a flip "Yes, mother" line) and by the climax, where she kills Scott to protect Tony.

Tony tries manfully not to steal Linda from Scott. He tells Linda that once before he stole away a girl Scott intended to marry, but that she was "no good," implying that on some level he did Scott a favor. However, despite Tony's claims of loyalty, it's clear that he wants to one-up his older brother in more ways than one. While Scott perfects his impenetrable metal, Tony comes up with a way to penetrate it. Initially Scott scoffs at Tony's method, equating it with the wild claims of ancient alchemists. Tony argues that he's found a way to speed up the process by which substances become amalgamated, and that it involves using a special machine that boosts his own brain waves, so that his own mind is instrumental in transposing atoms-- such as causing a pencil to become imbedded in a piece of steel.

On a side-note, in Colin Wilson's 1971 book THE OCCULT, Wilson argues that if the alchemists had been able to truly transmute metals, it could not have been done chemically, but only by some sort of mental magic.

Tony, having already stolen the woman Scott thought was his, indirectly causes his conservative brother to become consumed with this new line of research. Inevitably, Scott follows the course taken by Wells' "Invisible Man" and many others; he tries the process on himself. But whereas Doctor Griffin went mad because of the effects of the drug he took, it's suggested that Scott already has some brain-troubles, due to migraine headaches. Are the headaches the result of pent-up rage as he's constantly overshadowed, both by boss Carson and brother Tony? It would seem so, for once Scott gains the power to drain life-forces from humans with a touch, he intentionally kills Carson. He also kills another lab-worker, Roy Parker, who expresses envious sentiments toward Scott and who makes an unsuccessful pass at Linda some time before Tony comes into the story.

What we have, then, is the story of the Prodigal Brother, retold so that when the Prodigal comes back to the fold he manages to steal the Loyal Brother's girlfriend and poison his mind so that Loyal Brother goes on a killing spree. The cosmological aspects of the narrative, dealing with the ability of substances to penetrate one another, are largely metaphors for the psychological conflict, in which Scott, the sci-fi scapegoat of the tale, suffers for Tony's erratic brilliance.

Not to say that Scott is without fault. Early on he's portrayed as being overly logical, without any strong emotions and certainly without the ability to charm a woman. (Later he's picked up by a b-girl, whom he ends up killing; one wonders if the "no good" woman was also just after his money.) He never takes Linda's feelings into account, and his belated desire to relate to her causes him to drop his guard at the climax. After she's wounded him, he defiantly cries that no one can touch him-- and then essentially kills himself by trying to pass through a wall of cargonite, where he (like the earlier pencil) becomes stuck and expires.

Still, for all his faults, my sympathies remained more with Scott than either Tony or Linda, who don't come off as particularly admirable despite all their breast-beatings.
Posted by Gene Phillips at 3:16 PM
Email ThisBlogThis!Share to TwitterShare to FacebookShare to Pinterest
Labels: the marvelous