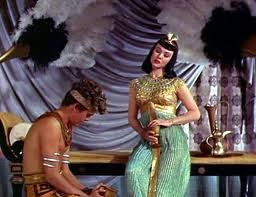 One of the great conundrums of art-criticism (in which I include the criticism of film) is that the critic may find mythic content in authors with whom the critic vehemently disagrees.  This is largely because myth, as Susanne Langer has profitably argued, is *presentational* in character: it makes its arguments by force of emotional tonality, not through discursive logic.

Irwin Allen's portentous philosophy-primer THE STORY OF MANKIND is, on the mythic level, fascinating in that Allen and his scripters tried herein to resolve the conflict between what C.P. Snow memorably described as the "two cultures" that dominated Western society: the culture of the sciences and the culture of the humanities.  Allen's opus isn't quite as ambitious with respect to the latter as the former.  For science, STORY relates many of the best-known parables of scientific discovery-- Isaac Newton and his apple, Alexander Graham Bell and his Watson, etc.  By contrast, the domain of the "humanities" is largely represented by acceptance of the values of the Judeo-Christian tradition (though in one quick scene the film gives the nod to Islam and Buddhism).  Art is never mentioned outside a Eurocentric context.

The most fascinating myth-component of STORY is only suggested by the initial setup.  Somewhere in outer space, a heavenly council of elders meets to decide the fate of mankind, by which they mean purely the inhabitants of Earth, of course.  What has mankind done to provoke this celestial scrutinization?  Well, they've invented a device called the "super-H-bomb."  However, the council isn't concerned simply because they've invented the thing: they're concerned because humans have invented it far ahead of schedule by some 60 years.  Buried in this odd scenario is not just the notion that human society may be moving too fast for its own good-- a common trope in science fiction-- but also that it can move so fast as to exceed the designs of fate itself.  For the mysterious council surely seems to be able to rule on the fate of mankind, though they don't appear to be Christian angels or any similar beings.  In addition, they exist in a world where the Devil himself comes to court to plead against humanity's survival (played by the always winsome Vincent Price, and usually called by the Devil's folkloric name "Mister Scratch.")

As in the Biblical story of Job, no debate on human fates large or small is complete without a defense attorney.  The film suggests that Adam, the First Man, was supposed to show up and oppose the Devil, which would have made a fun match given Satan's alleged jealousy of mortals from their earlier origins. I assume that an early version of the script possibly did use Adam as mankind's defender, but the completed script calls in a less controversial pinch-hitter, addressed only as "the Spirit of Man" (Ronald Colman, in his last film).  While the Devil argues that mankind has totally blown it and deserves extinction, the Spirit continually argues that Man can turn it around.  (One wonders, given the "super-H-bomb" scenario, if the filmmakers were hoping that mankind would prove worthy of atomic secrets within the next 60 years.  As of this writing things don't look all that optimistic for 2017.)

So the Devil and the Spirit take the elder-council on a Magical History Tour of mankind's highs and lows.  The Devil's first witness for human infamy is the Pharoah Khufu, who supposedly once made a deal with the Devil for immortality-- though despite gaining this immortality he also built his pyramid to keep a more visible form of immortal presence. Khufu, by the way, objects when the Spirit of Man calls him "godless." And before anyone can speak the magic words "Egyptian religion," up jumps the Spirit to declare that something good did come out of Egypt: Moses, leading his people nobly to freedom.  The Plagues of Egypt are not mentioned, though Moses' acquisition of the Ten Commandments is depicted as a real historical event.  Later, the Spirit will aver that sometimes history and mythology become confused, allowing the audience to believe what it will about what is or isn't confused here.

The Greeks get the next mention on the "top 40" parade of historical hits.  The Devil points out that the Greeks did pretty well despite worshipping dozens of gods, although they too were as warlike and avaricious as the rest of humanity and just as deserving of annihilation.  The Spirit of Man conveniently vaults over the issue of polytheism and characterizes the Greeks largely in terms of their contributions to science, thus setting up the C.P.Snow dichotomy noted above.

Feminists, by the way, would probably not like Irwin Allen's version of history.  Joan of Arc and Elizabeth I are the only examples of positive influential women in Allen's mostly-male history of the world.  Moreover, these two make less of an impression than such Evil Women as Helen of Troy (who laughs as men destroy each other in her name) and Cleopatra, seen in the illo above poisoning her brother to keep him from claiming her throne.  Incidentally, when Cleo links up with Julius Caesar, the script criticizes her for dallying with a man "old enough to be her grandfather."  Unsurprisingly, the script makes no complaints later in the "Peter Minuit" section, where Minuit (played by 67-year-old Groucho Marx) not only swindles the Indians who sell him Manhattan, but also runs away with the chief's 27-year-old daughter.

For American viewers the Devil's most affecting arguments may be those critiquing the high ideals of the American Revolution, for its slaughter of Native Americans and the creation of slavery in the U.S.  I give Allen a point or two for at least mentioning these dubious moments of history, but no sooner does the Devil mention slavery than the Spirit of Man quickly switches topics (and advances several years in history) to start talking about World War II.

It all wraps up when the Spirit of Man calls forth "the Man of Tomorrow"-- actually a child-- to demonstrate the potential positive fate of humankind's continued existence.  But in case this still doesn't grab the elders, the Spirit pulls out his trusty Bible (provoking a comic over-reaction from Price, who argues that the book has no place in court).  The Spirit reads a rather unmemorable preachment from the Bible, which I confess I've already forgotten, and the council decides in the end to postpone its decision a little longer, essentially giving mankind more time to clean up its act.

Allen's "Readers' Digest" version of history is pretty risible, and on occasion, the film more or less admits this in the comedy-relief scenes (Harpo as the aforementioned discoverer of gravity).  The script doesn't come anywhere near bringing about any truly thoughful reconciliation of the two cultures, but it can still be enjoyed on the basic fannish level of "look, there's Peter Lorre playing Nero!"

Posted by Gene Phillips at 2:06 PM
Email ThisBlogThis!Share to TwitterShare to FacebookShare to Pinterest
Labels: the marvelous