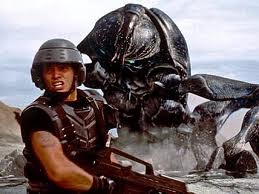 In the DVD commentary to the film, director Paul Verhoeven and screenwriter Ed Neumeier agree with the sentiment that Richard Schickle expressed (albeit uncertainly) toward their movie:

"War makes fascists of us all!"

TROOPERS, released six years after the prosecution of the Gulf War, seems less applicable to that conflict-- or to Verhoeven's own childhood experiences during the Nazi occupation of Holland-- than to the Iraq War of 2003. Verhoeven claims that he received criticism for the alleged fascism of ROBOCOP, whereupon he decided to up the game by adapting Robert Heinlein's STARSHIP TROOPERS and giving it the downbeat nature of the literary form known as "the irony." In an irony, even if the main characters seem to triumph in the end, there's always a subtle downside to their apparent victory. Here that downside takes the form of main character Johnny Rico becoming essentially "brainwashed" (Verhoeven's word) by the forces that insist on the utter valorization of military effort in any and all manifestations.

The script is clever. The propaganda-slogans and preposterous false logic that various characters use to support the war effort of Earthmen versus alien "bugs" is meant to constantly de-stabilize the viewers' identification with the heroes' efforts. It may be, though, that at base it's a little too clever for its own good. Because Verhoeven and Neumeier don't really want viewers to empathize with their unconsciously fascist protagonists, the characters are often overly flat, as is often the case with satirical figures. Additionally, though the filmmakers intend to make the audience regret the large-scale loss of young lives to the military machine, only a few of the characters succeed in projecting real feeling. One of the few that does is Dizzy (Dina Meyer), with whom audiences relate because it's established that she bears an unrequited torch for main hero Johnny (Casper Van Dien), who in turn carries a torch for somewhat distant officer-in-training Carmen (Denise Richards). The filmmakers reveal that early viewing audiences told them that they killed off the wrong female lead, as Dizzy perishes and Carmen lives. But though one might see this as somewhat indicative of anti-feminism, as the filmmakers do, it may also be that the audience simply identified with Dizzy's greater spectrum of humanity and hated to lose her.

Some of the lines, emphasizing the willingness of the soldiers to sacrifice their lives for "the species," sound as if they were lifted straightforward from Heinlein's book, which is, though not fascist as such, does present the case for military hostilities as valid without much questioning. However, it might be said that the filmmakers present their case with roughly the same level of one-sidedness.

Perhaps the real lesson here is that art, just as much as war, has the propensity to "make fascists of us all!"
Posted by Gene Phillips at 3:40 PM
Email ThisBlogThis!Share to TwitterShare to FacebookShare to Pinterest
Labels: combative ironies, the marvelous