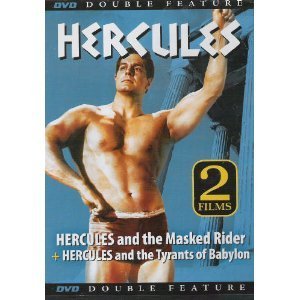 Apart from the categorization problems offered to my theory, HERCULES AND THE MASKED RIDER's only entertainment value lies in its title.  Upon watching the film, it's evident that "the Masked Rider," not Hercules, is the star of the show.  Otherwise, RIDER is nothing but a run-of-the-mill swashbuckler set in 16th century Spain.

In my system, a figure like Hercules can be "marvelous" if he's given powers like those of the gods, as in the 1959 HERCULES.  He can be "uncanny" if he's just a normal man with somewhat awesome muscular strength, which describes the majority of the Hercules/Samson flicks of the early 1960s, some of which starred RIDER's cast-member Alan Steel.  Here, however, Hercules (Steel) is a minor character who does some minor strongman feats, so the "Hercules" hero here possesses "outre skills" in a naturalistic context.

However, the main character of this swashbuckler does don a mask and cape for a few minutes, and becomes a name to conjure with a la Zorro and other masked adventurers.  So this particular development qualifies the film to be uncanny because of the (admittedly brief) presence of the hero in his masked identity.  The plot isn't worth commentary.

TYRANTS is uncanny as well, and within the same "outre" category, but in the more traditional *peplum* style.  Rock Stevens (aka Peter Lupus of 1960s MISSION: IMPOSSIBLE fame) stars as Hercules, who does toss around some good-sized rocks against various evildoers.  He journeys to Babylon to rescue a coterie of Greek captives, among whom is Queen Esperia of the Hellenes, for whom Hercules has a thing.

Three Babylonian co-rulers are responsible for the enslavement of Hercules' fellow Greeks.  Two of the villains are just standard bad Orientals, but the third ruler takes on greater stature, thanks to the always sultry performance of Helga Line, as Queen Tanit (pronounced "Taneel," as in "Captain and.")  Line schemes more against her fellow rulers than against Hercules, and unlike most ancient rulers has her own Bond-like doomsday device: a giant mill-wheel set to bring the city of Babylon tumbling down so that Tanit can rule the land alone from Nineveh.  A similar effect is pulled off with considerably more flair in 1961's MOLE MEN AGAINST THE SON OF HERCULES. Here the effects of the city's destruction are pretty penny-ante, but any film with Line in it scores a little higher than average.

Posted by Gene Phillips at 10:20 AM
Email ThisBlogThis!Share to TwitterShare to FacebookShare to Pinterest
Labels: combative adventures, diabolical devices (u), outre outfits (u), superlative skills (u), the uncanny