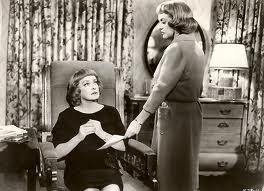 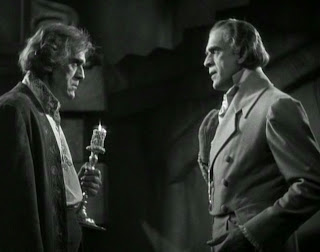 
It is believed that twins are able to bestow happiness,
health and prosperity upon their family. However, since
they can also bring about disaster, disease and death, they
will be treated with all due respect, loving and care. Their
upbringing is therefore far more permissive than that of
other children (Stoll & Stoll, 1980).-- from this website.

I chose to pair these two films in review because they respectively show naturalistic and uncanny takes upon the real-world phenomenon of twinship.

That phenomenon is not readily associated with the popular conception of "the freak," as is the related phenomenon of "conjoined twinship," even though the same basic biological processes give rise to both entities.  But in terms of fictional narrative, twins can be used isophenomenally (as in Paul Henreid's DEAD RINGER) or metaphenomenally (as in Roy William Neill's BLACK ROOM). Both films turn on an identical plot-idea-- a sibling murders his/her twin in order to take the twin's place in society-- and both stories are star vehicles in which the star naturally plays both roles through the use of film illusionism, with the emphasis naturally centering on the murderer and his/her attempted deception.

In RINGER, Bette Davis imparts an sympathetic air to the travails of Edith, who lost the love of her life to twin Margaret.  Margaret bamboozled Edith's rich suitor into marriage with a pretended pregnancy, leaving Edith to cry in her beer for the next 20 years, during which Margaret's husband passed away and left all of his wealth to the scheming twin.  When Edith-- suffering in comparative poverty-- finds out about Margaret's deception, she arranges to kill Margaret and assume her identity.  To do this, Edith also has to fake her own death, much to the chagrin of her friend police sergeant Hobbson (Karl Malden), who unbeknownst to Edith has been in love with Edith for years.

Naturally, the road to riches doesn't go smoothly for Edith, particularly when it develops that Margaret had a boyfriend who regularly drops in, expecting "Margaret" to welcome him.  RINGER doesn't contain any real surprises, and in tone feels like many of the crime melodramas Davis made twenty years earlier.  In time Hobbson begins to suspect "Margaret" of committing the murder of "Edith," resulting in a typically ironic conclusion.

Davis and Malden acquit themselves best, particularly when Hobbson comes this close to suspecting what really happened, and when Davis realizes that she wasted years of her life not being with the ardent detective.  In 1964 Davis was still a few months away from debuting in her first all-out horror-work, HUSH, HUSH, SWEET CHARLOTTE.  (I don't rate BABY JANE as horror at all, merely as a macabre thriller.) RINGER is simply another thriller that avoids anything spooky or macabre about the twins and their relationship.  To the extent that one can regard "twins" as a manifestation of the freakishness of birth-processes, RINGER stays firmly within the boundaries of the naturalistic.

In contrast to Davis, whose association with horror-films was yet to come, the star of 1935's THE BLACK ROOM had become America's "poster boogieman" for the genre.  Even if one discounts everything Boris Karloff had done prior to 1931's FRANKENSTEIN, eight of the sixteen films he did up to appearing in ROOM were metaphenomenal in nature, if not always strictly in the horror-genre.  Yet Karloff also did several films throughout his career that are much like Davis' RINGER: thrillers with no metaphenomenal content.  So the question arises: would BLACK ROOM qualify as a metaphenomenal film if an actor with a more mundane resume played the role?

In contrast to RINGER, I believe ROOM does play off the "strangeness" of the twin-phenomenon.  It helps that the twins in the film are such broadly-drawn opposites.  Gregor, baron of some Tyrolean province by virtue of being born first, is an absolute rotter, while younger twin Anton is a soulful angel, despite the fact that he, unlike Gregor, was born with a deformity: a paralyzed right arm.  In addition, both twins have been somewhat haunted by a prophecy.  Their noble line began with a pair of twins, who fell out.  The younger murdered the older and dumped his body in a dungeon called "the Black Room," so the prophecy asserts that the baronial line will die out the same way.  The main body of the film begins with Gregor inviting Anton back to the palace after an estrangement of many years.  Anton accepts, having no knowledge that Gregor is both a tyrant to his people and a libertine who has caused many women to simply "disappear."

Anton finds out soon enough.  Gregor takes Anton to the long-sealed Black Room, shows him some of the corpses he's dropped into the dungeon, and callously murders his brother there.  Then Gregor, knowing that his people plan to rise and oust him from his position, feigns to cede his office to Anton-- planning to masquerade as Anton (complete with a pretense of a paralyzed arm) for the rest of his life.

Gregor is such a clever cad that one almost expects him to pull off the deception.  His libido proves to be the heel's "Achilles heel."  He fancies young Thea (Marian Marsh), who is both the daughter of a political opponent and the fiancee of a young soldier, so he connives at a marriage between Thea and "Anton."  This forces him to take more chances and commit more murders before ultimately, unlike the Bette Davis character, Gregor is exposed in public.  A rousing chase-scene follows, leading to a climax in which, as the prophecy suggests, the younger twin does slay the latter.

Prophecies which seem to come true, but are not actually dispensed by gods or psychics, I deem "uncanny" under my category of "phantasmal figurations," in that their provenance is questionable at some time during the story.  But even without this aspect of the film, Neill confers a sense of  "strangeness" to the proceedings.  It's certainly possible that another filmmakers might have taken the same plot-elements and rendered something more naturalistic, along the lines of Joseph Mankiewicz's DRAGONWYCK.  But in BLACK ROOM the twins by themselves make a very strange pair, at once (as the myth-quotation above has it)  capable of bestowing both beneficience and malevolence equally-- while in RINGER, both twins are just two eccentric human beings.