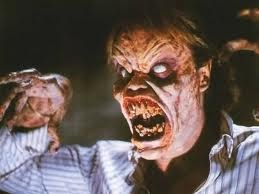 
I don't remember much about my earliest screening of EVIL DEAD, except that back in the days of videocassettes I rented it together with EVIL DEAD II. Like many horror-fans, I found the more manic (and comic) version of the story to be the more interesting. My recent rewatch of EVIL DEAD on Halloween weekend was probably the first time I bothered to see the original opus again.

My main observation is that there really isn't much to say about DEAD in his "straight" manifestation. Writer-director Sam Raimi patently made the film as cheaply as possible, with no-name actors in one location. It's principally a movie that gets by on the technique of Raimi's camerawork and the special FX, which are very much of their time in terms of their fascination with splattery gore.

EVIL DEAD I is funny, to be sure, but in contrast to the sequel, the humor stems from laughing at the transparent cheesiness of the story, not from imaginative setups within the story proper (with the possible exception of the notorious "Tree Rape.") I imagine that Raimi, unlike many previous cult-film makers, was aware of the risible nature of his story. The most one can say is that EVIL DEAD was a "training-exercise" that gave him good experience for much better work down the line. The same applies to principal actor Bruce Campbell, who's pretty terrible throughout DEAD, even though he was the only one of the unknowns to acquire some measure of lasting fame.

I term this film's function "sociological" only because it follows a common narrative trope in constructing a small, unstable society and then exploiting the tensions between the characters. Here it's five young college-students renting a cabin in the Tennessee woods, who have the misfortune to unleash a bevy of Sumerian demons, who take turns possessing each of the students and turning them against their fellows. The possessions turn each possessee into gross monsters who can only be stopped by dismemberment. This might have been more impressive if all the characters were not such ciphers that they make the victims of FRIDAY THE 13TH movies seem like figures from an Ibsen play by comparison.
Posted by Gene Phillips at 3:49 PM
Email ThisBlogThis!Share to TwitterShare to FacebookShare to Pinterest
Labels: the marvelous