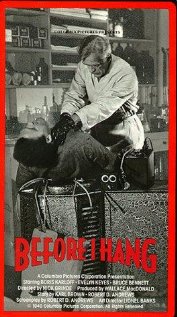 As I remember, I first saw Boris Karloff's first three "mad doctor" films for Columbia in chronological order of production. I also remember thinking that the third, BEFORE I HANG, was the least of the three.

However, on re-viewing HANG, I think it's a little more adventurous than the previous two Columbia Karloff-outings, both of which concerned a dedicated but somewhat fanatical scientist trying to bring people back to life through new scientific procedures. HANG, however, pursues a different course toward restoring life, as Karloff's Doctor Garth argues that his unique treatments can reverse old age. A lot of people may idly wish for this or that person to return from the dead, but it seems to be a more universal wish to reverse the course of aging.

In TYRANNY OF THE NORMAL, Leslie Fiedler argues that modern attempts to slow that course are the equivalent of Faust's ancient bargain, even if moderns need not actually sign devilish contrasts in their own blood. Nick Grinde's HANG, despite being a cheap B-film, sometimes touches on this theme very aptly. The film begins with Garth already in prison for having committed a mercy killing. He makes an impassioned speech to the warden to be allowed to continue his research, asserting (as many modern anti-aging treatments do) that aging isn't inevitable: that proper treatment can eliminate the "poisons" that build up in the theoretically eternal cells. Most B-grade mad scientist-films don't try very hard to provide even a modicum of scientific logic to their wondrous effects, so the scripters of HANG should be credited for grounding Garth's speech in this particular theory of human aging-processes.

Naturally, Garth soon learns that you can't get something for nothing, when he attempts to reverse aging by injecting himself with the blood of a fellow prisoner, a convicted murderer-- perhaps more borrowing from HANDS OF ORLAC and MAD LOVE than from FAUST here. Garth manages to de-age himself, perhaps about twenty years, but the cost of this devil's bargain is that he begins to commit senseless murders. However, unlike the alter ego of Mister Hyde, this doctor manages to conceal his deeds so well that the authorities believe him a modern saint (not least because he holds out the promise of eternal youth) and commute his sentence. Soon Garth is free, and one of the first things he does is to try to persuade a small elite class of talented men to join him in gaining relative youth. His effort fails, as one of the older men eloquently refutes the need of the aged to have any more lifetimes. In frustration Garth kills his dialectical opponent and nearly menaces his daughter before he's finally detected and brought to the hangman's noose.

The anti-aging theories supply the aforesaid cosmological content, but the most interesting psychological component, apart from the Faust/anti-Faust debate, is what HANG leaves hanging. Unlike Faust, Mister Hyde and most over-reachers who get a second lease on life, Garth never becomes preoccupied with pursuing the opposite sex once more. I don't know if the screenplay's writers even gave the idea any thought, as they were attempting to promote the idea of Garth as fundamentally well-intentioned. In addition, while the magic of makeup may have de-aged Garth to Karloff's real fiftysomething age, there was no way a production like this one could have reversed time enough to make Garth into a credible predator, as was the case with Hyde. Thus "death" rather than "love" becomes the obsession of this bargain-basement Faustian.
Posted by Gene Phillips at 2:16 PM
Email ThisBlogThis!Share to TwitterShare to FacebookShare to Pinterest
Labels: the marvelous