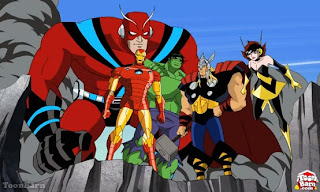 There have been dozens of media-adaptations of Marvel Comics characters since the company rose to prominence in the 1960s. However, aside from a handful of cartoons produced during that decade, few adaptations sought to emulate the resonance of Silver Age Marvel. Usually, any time a production company got its hands on, say, SPIDER-MAN, they decided to do "their" version of Spider-Man, which could be anything from "Spider-Man and His Amazing Friends" to "Spider-Man Unlimited" (Spidey trapped on an alternate Earth with lots of ugly beasties that looked like they escaped Image Comics).

Such an approach isn't unjustified, given that the Silver Age style in Marvel Comics faded with the arrival of the Bronze Age and with the infusion of many new talents who had their own often boundary-shifting takes on Spider-Man, the Avengers et al-- to say nothing of the changes that took place in subsequent decades. None of these changes are in themselves objectionable; each generation speaks to its own particular concerns. And perhaps that was for the best. Generally speaking, it was rare to see any comics-professionals of later generations credibly reproduce the excitement and inventiveness of Silver Age Marvel, least of all the overblown "homage" of Alan Moore's "1963" works.

So if Marvel Comics themselves don't credibly pull off the Silver Resonance, why should anyone when adapating the characters to other media?

To my surprise, the first season of THE AVENGERS: EARTH'S MIGHTIEST HEROES, which debuted on the Disney XD Channel in fall 2010, did a fine job of assembling not just the Avengers but also the Marvel Universe in which they operated.

As the illustration above suggests, in the first season the series emphasizes the same characters who started the supergroup in the early 1960s comic books: Thor, Iron Man, the Hulk, Giant-Man (leaping over but not forgetting his previous I.D. as Ant-Man) and the Wasp. As it happened, the comic-book series didn't focus on these characters past the first fifteen issues-- indeed, one of them, the Hulk, had departed the group in issue #2. For the rest of the Silver Age the supergroup concentrated on bringing together diverse heroes who didn't have their own features, such as Hawkeye, Scarlet Witch, Quicksilver, and Black Panther-- one exception being Captain America, who shepherded the motley crew for several issues before he too departed.

In contrast, AEMH is all about Marvel's "big guns," in deference to the live-action films featuring three of the five charter-member characters. Yet the writers (headed by one Christopher Yost, a veteran of the X-MEN EVOLUTION teleseries) have done a fine job of keeping the storylines fluid enough to work in a varied array of classic Silver Age characters, principally Captain America, Black Panther, Hawkeye, and Black Widow-- the last two also slated for the 2012 live-action film. And if the series is entirely dependent on the Silver Age comics for its villains, at least it chooses some of the best-- though on occasion, some of the worst, like the Mandrill, are included for comic effect.

The series, like the original 1960s comic, begins in media res, in that the separate heroes and their foes have already been around for years before the good guys band into the Avengers. There's a decent if unexceptional plotline establishing that one motive for the group's formation is that of following the group's conscience rather than being manipulated by the government, as represented by SHIELD honcho Nick Fury. This roughly references a similar development in the live-action IRON MAN 2 (2010), and to some extent Iron Man, having been one of the better successes of cinema-Marvel, does assume a more central role in the AEMH series than he did in the comic book. Other plot-developments are clearly derviced from storylines established in this year's feature-films, THOR and CAPTAIN AMERICA, particularly one in which Cap's foe the Red Skull starts siphoning powerful entities from Thor's Asgardian realm. It's a credit to Yost and his writers that these adaptations don't seem intrusive in the overall story-arc.

Plotwise, my worst criticism is that on occasion the writers introduce a character who has very little impact on the plotline as such, with an eye toward further expansion later. Such is the situation in Episode 10, "Everything is Wonderful," which interrupts the overall arc (super-villains busting out of all the high-security prisons) to introduce viewers to the cartoon's version of Wonder Man. True, Wonder Man would come to be an important character in long-term Avengers history. But his cartoon adaptation comes off as being of little consequence to the overall plot, leading me to wonder, "what was the point of that, beyond a fannish reference?"

Still, on the whole AEMH recaptures the feel of the way Silver Age Marvel felt: not only in terms of ambitious plotlines and deft character touches, but also in the way the heroes are portrayed. Silver Age creators such Lee, Kirby, Heck and Thomas always portrayed the Avengers in broad heroic strokes, keeping them distinct without bogging them down with too much labored characterizational tics. The result is that, very much in contrast to a lot of current Marvel Comics product, the heroes of AEMH are actually both likeable and interesting.
Posted by Gene Phillips at 3:01 PM
Email ThisBlogThis!Share to TwitterShare to FacebookShare to Pinterest
Labels: combative adventures, the marvelous