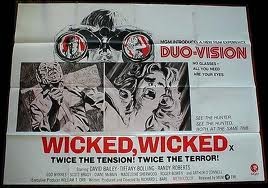 Director/writer Richard L. Bare, veteran of many B-films and TV shows (among them TWILIGHT ZONE's "To Serve Man"), demonstrates in WICKED WICKED that two bad movies for the price of one is no bargain.

To be sure, the basic idea of "duo vision" has promise, if used artfully enough.  During the same year Brian dePalma made excellent (but more restricted) use of split-screen effects in SISTERS, and would pull off even better effects in 1976's CARRIE.  Thirty years later, Ang Lee employed a related technique in the 2003 HULK film, using "inset panels" to offset the on-screen action. I wasn't a fan of Lee's use of this concept, but some liked it.

It's hard to imagine anyone getting much out of Bare's WICKED WICKED, except in the usual "so bad it's good" sense.  Most of the time the split-screen isn't used to convey suspense, but simply shows one mundane action on one screen and slightly more arousing action on the other.  The overall look of the film screams "TV movie."  Bare's story is "PSYCHO in a hotel," though the psycho in Bare's film wears monster-masks when he kills his female victims, rather than his dead mother's clothes.
That said, killer handyman Jason (Randolph Roberts) is wholly defined by mommy issues, and in a much more desultory fashion than seen in either the Bloch PSYCHO novel or the Hitchcock adaptation.  At one point late in the film, one half of the screen shows the contemporary Jason talking about his past, while the other half shows him being first molested by an adoptive mother, then abused by an adoptive father.  This is practically Freud 101, but Bare (also the writer of the screenplay) never builds on this ramshackle Freudianism.

When WICKED isn't dealing with Jason's main opponents-- a hotel detective who suspects that too many female residents are going missing, and his ex-girlfriend (Jason's "Final Girl")-- it sets up assorted side-stories about the hotel's quirky residents.  These seem to exist just to fill up time, for with one exception Jason only kills young blond women, so no one else in the hotel stands in danger.
The "one exception" is an older female resident, impoverished actress Mrs. Karadyne.  She befriends Jason, possibly because she senses his need for a legitimate mother-figure.  In the film's only effective use of "duo-vision," one half has her in present-time telling Jason about how her late husband abused her, while the other half shows that after said abuse, Mrs. Karadyne killed her abuser with a fire-poker!  However, when she finds out Jason's secret, that's the last trip she ever takes down memory lane.

The wrapup has one pleasing scene of grotesquerie, as Jason takes his Final Girl (Tiffany Bolling) to a lair where he's assembled the corpses of his previous victims, a la the folktales of Bluebeard and the later HAPPY BIRTHDAY TO ME (1981).  But as the film sputters to a close, it winds up being little more than one of several precursors to the development of the "slasher-film" genre.
Posted by Gene Phillips at 2:44 PM
Email ThisBlogThis!Share to TwitterShare to FacebookShare to Pinterest
Labels: perilous psychos (u), the uncanny