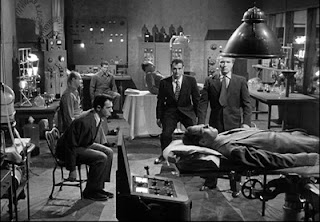 CREATURE WITH THE ATOM BRAIN's title is probably its best feature, as the film itself is, like ZOMBIES OF MORA-TAU, one of director Edward L. Cahn's more workmanlike affairs. I remarked earlier that Cahn did seem able to exert extra effort given a solid script, but CREATURE's story, courtesy of famed fantasy-writer Curt Siomark, is perfunctory at best. The film sustains some interest in that it's one of the several Siodmak films dealing with the nature of the mind and/or brain, but CREATURE is pretty limited in what it has to say about either. It reminds me of nothing so much as an 1940s serial crossbred with a LEAVE IT TO BEAVER story.

Following his deportation from the U.S., gangster Frank Buchanan sneaks back into the country with a new acquisition picked up in Europe: an ex-Nazi mad scientist. (That'll teach the U.S. not to dump criminals in the Old World: who knows what kind of apocalyptic madmen they may bring back with them?) The scientist, Doctor Steigg, has perfected a way to raise men from the dead using atomic-powered mechanisms. (This tip of the hat toward atomic-menace films of the 1950s is about all one gets to justify the title: neither Siodmak nor Cahn seems to have invoked atomic perils much in their films, in marked contrast to Jack Arnold or even Fred Sears.) And raising the dead isn't all Dr. Steigg can do: he can also fit them with cameras, so that while still in the laboratory his boss Buchanan can see everything seen by the dead eyes of his atomic puppets-- which is a visual motif that strongly resembles similar devices from science-fiction serials, though they usually confined themselves to robots rather than the living dead. Given that these revived cadavers are both super-strong and invulnerable, it's surprising that Buchanan doesn't choose to emulate the more ambitious world-rulers of the old serials, but seems interested only in avenging himself on the people who deported him via his zombie assassins. One assumes he planned to get around to ruling the world sooner or later, though.

Steigg is a curiosity: given his Nazi background he's not precisely sympathetic, but he doesn't like being controlled by Buchanan, and so comes off as a little less despicable than his boss. I think he would have made a better villain than the rather mundane gangster, perhaps in part because the actor playing him, Gregory Gay, had previous experience conquering the world as the head villain of FLYING DISC MEN OF MARS.

Richard Denning plays the sort of stalwart policeman-hero common to 1940s serials, but with a difference: this time the tough cop has a wife and a small daughter (hence the BEAVER reference). CREATURE's one memorable moment takes place at the white-picket-fence home of Denning's family, when Buchanan zombifies Denning's cop-brother and sends him to the Denning house to gain intelligence of police activities from the unsuspecting wife. Cahn does maintain some decent suspense as to whether the killer zombie will do something horrible to the cute little daughter while he's sitting around pretending to be alive.

The final battle of cops vs. zombies is fairly risible, especially when the zombies don't even react when hit by grenades that act more like smoke-bombs. Still, I must admit that the key idea of invulnerable dead men shambling their way through troops has been a fantasy strongly nurtured by the zombie-film genre, so CREATURE deserves a few points for being among the first cinematic articulations of the idea.

To be sure, I was probably too old for the scares of this film when I first saw it. I note in passing that three or four imdb respondents found it terrifying when they viewed CREATURE as kids.
Posted by Gene Phillips at 9:38 AM
Email ThisBlogThis!Share to TwitterShare to FacebookShare to Pinterest
Labels: the marvelous