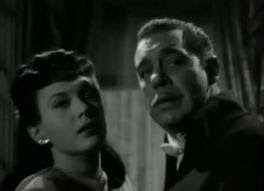 
In my review of DRACULA PRINCE OF DARKNESS I said:


"I'd speculate that filmmakers in the 1930s and 1940s might have been wary of claiming that this kind of blasphemous corpse-activity [Dracula reviving again and again] could take place on a regular basis."

Robert Siodmak's SON OF DRACULA manages to have it both ways, in that one character claims that the mysterious "Count Alucard" is really the Dracula of legend, while two other characters speculate that he may simply be a descendant of the Dracula line, though possibly that line was added only to justify the title. Admittedly Alucard (Lon Chaney Jr.) never speaks or acts as if he has some long-dead paternal figure in his background-- something of a vivid contrast to an actor who actually did take his father's name to advance his career.

In any case, though it's likely that the Curt Siodmak-Eric Taylor script meant to imply that Alucard was the real Dracula, they clearly abandon any real continuity with 1931's DRACULA, in marked contrast to 1936's DRACULA'S DAUGHTER. When the legend of Dracula is discussed by this movie's fearless vampire killers, they seem to believe he died long before the story's modern-day setting. Thus the script is spared the trouble of having to figure out how Dracula was resurrected, which became a repeated theme in some though not all of the Hammer DRACULA series. When Universal Studios did their next version of Dracula in next year's HOUSE OF FRANKENSTEIN, even less continuity is stressed. Ironically John Carradine's Dracula-- the first cinematic Dracula to be revived on-screen in U.S. cinema-- is revived as if he had previously suffered the staking-death doled out to Bela Lugosi at the end of the 1931 film, not the "death-by-extreme-tanning" to which Chaney Jr.'s vamp succumbs.

Chaney Jr.'s take on Dracula is definitely *not* one of those perfomances of which one can say, "You'll either love it or hate it." I'm with the many fans who think he did the role adequately, though given the actor's general hangdog look, I wish the script had gone with Dracula as a troubled, lonely soul rather than a master planner-type. Chaney Jr. does project a strong sense of power as Dracula, but he doesn't seem to be much of a thinker. His best lines are the ones when he meditates about enjoying the "virile" potential of a young healthy country, as against his native Hungary, which he and the local vampire expert Professor Lazlo consider to have been "drained" of life.

In a way, SON might be read as the fair sex's revenge for all the times Dracula fanged feminine necks. This Dracula doesn't make plans to invade the modern world: he's brought to America-- specifically a rich Southern plantation--by the influence of morbid heiress Katherine Caldwell (Louise Albritton). Katherine, unlike her sister Claire (Evelyn Ankers), has a deep belief in the occult and a fear of death (the professor calls her a "thanatophobe.") Not long after "Count Alucard" arrives, Katherine and Claire's father mysteriously dies of apparent fright, bequeathing his inheritance to the two sisters. Not long afterward, Katherine throws over her long-time fiancee Frank and officially (if secretly) marries Count Alucard.

Frank, driven to distraction by this betrayal, gets into a fight with Alucard, who naturally hurls him away like a flea. The outraged fiancee draws a pistol, shoots Alucard, and kills Katherine when the bullets pass harmlessly through the vampire's body. Frank tells various people that he's killed Katherine, but thanks to Alucard Katherine rises from the dead as a vampire, and pretends to be alive. Later she comes to Frank in his cell, telling him that she only married Alucard to gain vampiric immortality. She promptly betrays Alucard by telling Frank how to destroy him. However, though Frank carries out her wishes, he declines to join the ranks of the undead with Katherine and finishes her off as well.

Whereas the slightly-later CRY OF THE WEREWOLF bogged down with many tedious scenes of modern-day skeptics denying the existence of werewolves, the script of SON OF DRACULA alternates adroitly between belief and unbelief, as gradually Frank and his allies are convinced of the existence of the undead. Robert Paige does an excellent job as the beleagured Frank, a far cry from many of Universal's handsome leading-man nonentities. Other cast-members, even those introduced for humorous contrast, turn in effective performances as well, though Evelyn Ankers really has nothing to do. I'd speculate the script included her on the theory of giving a "consolation prize" once he found out that his former love was a rotter. Thankfully, there's no such "happy ending" intimated at the close of SON: Frank looks like he's well and truly devastated at having to off his former beloved, vampire or not. But the narrative focus is clearly on Chaney's Dracula and Albritton's scheming Katherine.

There's not much speculation on the metaphysics of vampirism this time, aside from the Stoker-derived image of his leeching the life out of whole countries. Katherine's "thanatophobia" is the main source of psychological interest, though at no time does the script really dwell on what makes her so fearful of death. A more complex film might have noted that she's complicit in the death of her father, but SON pretty much breezes past this sort of intensity.
Posted by Gene Phillips at 2:10 PM
Email ThisBlogThis!Share to TwitterShare to FacebookShare to Pinterest
Labels: the marvelous