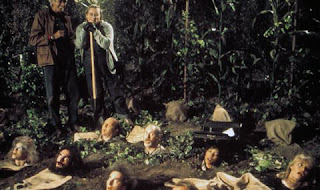 
"It takes all kinds of critters to make Farmer Vincent Fritters!"

Of course the great joke of this memorable movie-tag-line is that only *one* kind of critter provides the "mystery ingredient" that makes Farmer Vincent's smoked meats so popular.

I've seen MOTEL HELL termed a "parody" of earlier "hayseed horror" films like THE TEXAS CHAINSAW MASSACRE.  I agree that director Kevin Connor and his writers infuse a great sense of black humor into the proceedings, but strictly speaking, I wouldn't consider MOTEL a parody.  When Farmer Vincent (Rory Calhoun) proposes that his method of human-harvesting at once alleviates the population problem and feeds the hungry, it's done with dark Swiftian irony.  But though I found that and many other moments in MOTEL pleasantly absurd, I personally didn't find them funny in the sense I associate with true parody.

Another consideration is that as with CHAINSAW, there are scenes of genuine peril that are too grotesque to function as pure parody.  Any of the scenes in which Vincent and his batty sister Ida (Nancy Parsons) are extracting ingredients from their many human captives (most of whom have had their vocal cords cut) have this quality.  Though both Calhoun and Parsons have some over-the-top moments, they're reasonably serious when they project the idea that both of these mad mulchers really believe that they're being humane to their livestock.  The strongest such scene shows Vincent "humanely" using a gimcrack hypnotic device to lull several victims into a dazed but pleasant stupor before he and Ida kill them off.  Most of the other characters aren't much more than amusing cannon fodder.  Heroine Terry (Nina Axelrod) is theoretically the Final Girl who ends up exposing everything, but her character proves rather weak and inconsistent.  A cameo by then-celebrated DJ Wolfman Jack adds a little spice to the mix.

In addition to the tropes "perilous psychos" and "enthralling hypnotism," which should be self-explanatory, this film also includes the trope of "weird families and societies," with emphasis on the former, even though unlike most hillbilly horrors, the family's a rather small one, consisting of just Vincent and his sister.  I'm not sure whether or not Ida's jealousy of Terry, who tries to marry Vincent, was supposed to imply some quasi-incestuous bond or not, though that too would be one of the routine canards tossed at country-folk.

Given that director Connor had most recently done a host of Burroughsian and Arabian Nights fantasies, it's a small miracle the fact that MOTEL HELL, almost the polar opposite in the fantasy department, is as good as it is.

Posted by Gene Phillips at 3:17 PM
Email ThisBlogThis!Share to TwitterShare to FacebookShare to Pinterest
Labels: bizarre crimes and crimefighting (u), enthralling hypnotism and illusionism (u), perilous psychos (u), the uncanny, weird families and societies (u)