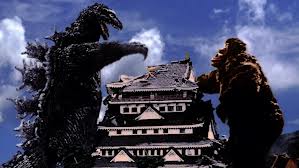 
I didn't have the chance to see KING KONG VS. GODZILLA on the big screen back in the day, but as a sixties kid, I remember thinking that it was a great "battle of titans," marred only by a little too much humor.

And now? I still like the basic idea of VERSUS, partly because the stop-motion masterpiece of the '33 KONG influenced the genesis of the 1954 GODZILLA.  The two creatures also represent very different phases of science fiction.  The 1933 KING KONG is romantic and backward-looking, communicating the charm of a lost prehistoric world.  1954's GODZILLA, for all that it revolves around a mutated dinosaur, is about a present-day apocalypse: an "end of times" in which a giant firebreathing lizard becomes the symbol of post-nuclear terror.

Though VERSUS is the third in the long-running Godzilla series, the script seems closer in tone to that of the 1933 KONG.  Godzilla's only previous battle with a giant creature, "Anguirus" in 1955's GODZILLA RAIDS AGAIN, comes about by accident, because both giant prehistoric monsters have been awakened from sleep by nuclear tests. VERSUS is the first time human beings seek to manipulate monsters into fighting one another, a plot-device taken up again and again in Japan's kaiju films, usually with aliens providing some of the manipulation.  Though at no time does VERSUS overtly condemn humans for doing this, there's an occasional hint that Kong is done an injustice by the scheming industrialist who takes him prisoner-- much as Kong is exploited by another capitalist schemer in the 1933 film.

Further, this Kong-- visually inferior to the original, but not quite as dopey-looking as the one in the otherwise superior KING KONG ESCAPES-- seems more benign than the King of Skull Island.  When a Japanese expedition journeys to remote "Faro Island" in search of a rare berry with soporific properties, it discovers a Kong who is worshipped by the superstitious South Sea Island-types, but doesn't seem to need any virgin sacrifices.  After Kong comes to the natives' rescue by repelling a giant killer octopus, the natives simply sing and dance Kong into slumber as he gets drunk on berry-juice.  So the big ape doesn't really have a dog in the fight between Japan and Godzilla, newly revived as he awakes from the glacier that entombed him at the end of RAIDS.

Incidentally, I haven't had a chance to re-watch either the 1954 GODZILLA or its sequel in recent months, but I wonder if VERSUS is the first film to posit that the Big G keeps heading back to Japan because it represents his ancestral home.  Something to check out later.

The actual physical contest between ape and lizard, sadly, is not one of the better battles of Japan's kaiju cinema.  It's more noticeable to me as an adult when Godzilla repeatedly aims his atomic breath not at Kong but toward the ground at Kong's feet.  Godzilla's fiery wrath instantly starts fires in the brush; yet on the two occasions when Kong is directly struck by a fire-blast, the big ape simply smoulders a little, patting his chest as if to suggest that he put them any flames before the viewer could see them.

To be sure, Kong himself does feel a little outclassed by Godzilla's radioactive advantage, and does what a real animal would do in those circumstances: he runs away. However, the film gives Kong a hidden advantage, claiming that Kong is made stronger by electricity.  There's no logic behind this claim, but the film does offer a little visual support for the association.  During the natives' Kong-lullaby the thunder keeps crashing, as if the filmmakers were making some connection between the natives' superstitious fear of real thunder and their worship of Kong. When the Japanese army constructs an electric fence around Tokyo, it does manage to turn away Godzilla, but Kong tears through the barrier, drinking up the electricity and then trashing the capital city in Godzilla's place.  Whereas Godzilla barely if ever noticed the activities of the humans he stomped, Kong remains true to form, taking a cute female prisoner.  However, this beauty doesn't bring about the beast's death, but her peril inspires her boyfriend to knock Kong out again, using a combination of berry-juice and an imitation of the South Seas drumming.

The rock-'em, sock-'em ending-- in which Kong is charged up with energy again by a passing thunderstorm-- has a sort of giddy charm, but it's almost entirely on Kong's side: Godzilla, whose previous film had been a box-office disappointment, isn't much more than a standard heavy here. Even in kaiju, it seems you're only as good as your last picture. Contrary to popular mythology, there was no separate ending in which Godzilla won their fight: in all versions Kong simply swims back to Faro Island after having symbolically "killed" Godzilla by wrestling him back into the sea.  However, Wikipedia asserts that the voices of both monsters are heard at the conclusion of the Japanese version, while the American version allows only Kong's roar to be heard.  I certainly wouldn't attribute any deep sociological motives in giving the apparent victory to "American" Kong over "Japanese" Godzilla.  It may well be that the producers favored Kong because they thought he might prove a more financially successful property.  However, only one other Kong-film was finished by Toho, while Godzilla took on renewed mythic propotions thanks to his matchup with the Big K.


Posted by Gene Phillips at 3:28 PM
Email ThisBlogThis!Share to TwitterShare to FacebookShare to Pinterest
Labels: combative dramas, the marvelous