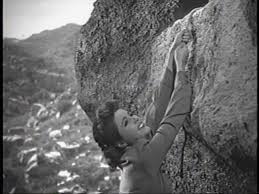 PERILS OF NYOKA is one of those rare serials in which the scenarios are so fluid that, even though they're just showing gun-battles or mounted pursuits that one has seen a million times before, they seem remarkably fresh.  With many serials, one has to approach their action-setups with bemused tolerance.  But director William Witney-- admittedly working with the highest budget Republic ever gave to a serial-- consistently keeps the action pumping at a high pace.  Characters never walk when they can run, never run when they can leap, and so on.

The film is a technical follow-up to the successful 1941 JUNGLE GIRL, a tolerable but not outstanding serial about Nyoka Meredith (Frances Gifford), the daughter of a jungle-doctor.  This Nyoka becomes embroiled in stopping treasure-hunters after the villains kill her father, and then conceal the crime by having her father's twin brother-- and Nyoka's uncle-- masquerade as the doctor.  Only toward the end of the serial does this Nyoka learn of her uncle's perfidy.

The new Nyoka is given the surname "Gordon," and her father is not a doctor, but an archaeologist working in North Africa.  It's never entirely clear what project Nyoka and her father are working on exactly, although at the opening of the film several Arabs are working under Nyoka and calling her "sahib."  Nyoka's father has actually gone missing prior to the film's beginning, but Nyoka interrupts her search for him to help a group of beneficent white men trying to locate the Lost Tablets of Hippocrates, which may contain a cure for cancer.

However, evil treasure hunters-- commanded by the exotic "Vultura," a rare female tribe-leader-- learn that the Tablets are the key to a great treasure, and they try not only to hijack the map to the tablets but Nyoka as well.  This is patently a "McGuffin" story, where two opposed groups seesaw back and forth trying to get hold of some precious object, or, in related manner, someone who can help them use the valuable item.

In addition to the febrile action-sequences-- which include Nyoka fighting it out both with male bandits and with the curvaceous Vultura-- the serial's writers create a wide variety of cliffhanger threats with which to imperil Nyoka and her allies, mostly standard leading-man Larry (Clayton Moore) and young, not-overly-comical "comic relief" Red (Billy Benedict).  As is often the case, the depiction of the perils are far more stimulating than the hackneyed ways that the heroes escape from them.  That said, the most original of the perils-- a natural "wind tunnel" capable of snatching up human beings and hurling them to their deaths-- is resolved in a better-than-average manner.

Characterization is minimal, but it isn't missed given the full-bore action here, including a plotline in which Nyoka finds her father, who has lost his memory and somehow become the leader of a tribe of Tuareg warriors-- and who tries to have Nyoka executed. This provides a little psychological interest.  Ben Singer's essay on silent serials, "Child of Commerce! Bastard of Art!," observes that in female-centered serials most plots involves a woman either seeking a lost father or his legacy.  Singer also cited a rare instance in which the father carried out actions inimical to his daughter without knowing her identity.  PERILS OF NYOKA managed to duplicate both paternal positions, beginning with Nyoka trying to find her father, almost being killed by his actions, and then being reconciled to him once he regains his normal memory.
Posted by Gene Phillips at 3:38 PM
Email ThisBlogThis!Share to TwitterShare to FacebookShare to Pinterest
Labels: combative adventures, diabolical devices (u), exotic lands and customs (u), outre outfits (u), the uncanny