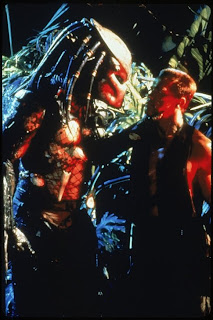 
PREDATOR has proven one of the most fertile franchises to be spawned in part by the Arnold Schwarzenegger boom of the 1980s-- perhaps proving more malleable than the TERMINATOR franchise due to the fact that PREDATOR's concept depended less on Arnold's presence.
There's no question that director John McTiernan and the scriptwriters had some awareness of the "men's adventure" mindset to which they played, not least because it takes place in the wilds of Central America, and because only one female character appears on screen (though there are typical men's jokes about "pussy" in the course of the film).  Arnold's character "Dutch" and his five elite mercenaries are hired by Dutch's old buddy Dillon (Carl Weathers).  Dillon, a former soldier now working with the CIA, wants Dutch's team to extract a missing cabinet minister, captured by jungle-dwelling guerillas when the minister's helicopter went down.  Dutch's early reservations about Dillon's CIA ties are later borne out: Dillon is in fact using Dutch to find out what happened to CIA agents gone missing when they investigated the guerillas' area.  Like many CIA ancestors to Dillon-- notably the quisling advisor from RAMBO II-- Dillon freely lies to the commandos to achieve his organizational ends, thus breaking the code of male loyalty that underlies all such adventure-tales.

Soon enough, the rescue time finds that it has more to worry about than Central American guerillas and untrustworthy agents.  After Dutch's team wins a firefight with guerilla forces and take one prisoner-- a female local named "Anna"-- they find themselves being hunted by a single being possessed of technology able to make him blend in with the surrounding jungle, so that in effect he becomes the jungle, able to attack the commandos at any time and with an array of super-scientific resources.  Slowly the alien Predator-- who is never called by this name in the film-- picks off its human quarries.  Anna, though she's not able to add anything to the formidable firepower of the group, supplies some historical perspective: as the sole person native to the area she tells the commandos of "demons" that have haunted the jungle at certain periods.  Fittingly, the Predators only come looking for game during the hottest times of the year, equating them with the fierce heat of the jungle as well as its visual torments.

McTiernan plays to the "body culture" of the 1980s by displaying many shots of the actors' buff bodies, and the script is just as on-target with regard to the almost masochistic bravado of the "men's adventure" genre.  When during the guerilla-firefight one commando informs another that the latter is bleeding, the wounded man replies, "I ain't got time to bleed." But the Predator ups the ante of the typical "men's adventure" story and confronts the experienced fighters with an enemy that none of them have ever conceived. Most of them acquit themselves reasonably well but only two survive: the star (of course) and the female he protects.  Since Anna's survival isn't strictly necessary to the plot, it might be conjectured that the script keeps her alive for purposes of rewarding the hero as in most stories in this genre: however, Dutch and his friends are kept too busy by their camoflagued foe to even contemplate sex from start to finish.

I rate PREDATOR's mythicity as "fair" because it does a good job of expressing the male-bonding culture while carefully avoiding any elements that might politicize the narrative, even on the cartoonish level of the RAMBO films.  It's possible to see the Predator as a symbol of the "invisible jungle native" who haunted American soldiers in Vietnam, but that would probably be reading the film in too narrow a manner. 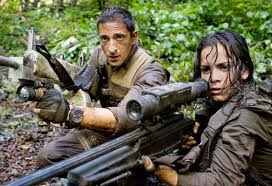 PREDATORS, though it's not any more interested in real-world politics than its progenitor, takes a different approach to the idea of "commandos vs. aliens."  Director Nimrod Antal and his scripters reverse the situation of the 1987 film by having a group of Predators abduct selected humans-- all experienced warriors or at least killers-- to an off-planet game reserve.  Just as the original Predator or one of his congeners had come back to Earth many times to hunt, the humans invited to the preserve in this narrative are not the first to be so abducted.  The narrative begins with Black Ops American soldier Royce plunging from some flying vessel at a jungle below him, obliging him to fight to open the parachute with which he's been supplied.  Seven others, all from different parts of Earth and all experienced in killing, also fall to the planet in the same way.  Eventually they come to terms with having been snatched from their world to be the Predators' "most dangerous game," and seek allies against the alien hunters-- first, another alien of a species related to the hunters, and second, another human who has survived in the preserve by going underground.

There's absolutely no appeal to 1980s body culture here: all the characters dress drably and practically, and there are no over-the-top moments about not having time to bleed.  In their place the scriptes offer an almost Nietzschean indictment-- though also an acceptance-- of the lengths to which humans will go to survive.  Royce, the de facto leader, is also a loner who wants no ties, but semi-predictably ends up forming them anyway.  The other victims are not as heroic as those of McTiernan's film and so are not particularly missed when they're picked off.

I give PREDATORS a fair rating for having at least grappled, if only in a superficial way, with the problems inherent in the old saying, "Man is a wolf to man"-- which in this case, may be extended to men of other worlds as well.  Refreshingly, there's no Rod Serling moaning about man's inhumanity, but a need for human connection is acknowledged, though it's always rendered conditional on the fact of survival.  Oh, and the action's pretty good, though at no time do any of the characters or situations manage to capture the "mythic feel" of this movie's period as PREDATOR did for its era.

Posted by Gene Phillips at 4:19 PM
Email ThisBlogThis!Share to TwitterShare to FacebookShare to Pinterest
Labels: combative dramas, the marvelous