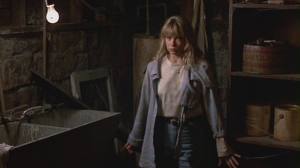 
After three films which focused on Tommy Jarvis as a "Final Boy" protagonist, the FRIDAY series finally circles back to the "Final Girl" syndrome with which the series began.  Further, it features one of the few times Jason would encounter a power comparable to his own, making NEW BLOOD one of the few "combative dramas" in the series.  BLOOD has often been dismissed by the summation: "Jason Meets Carrie."

There's considerable potential, both realized and unrealized, in BLOOD's scenario.  Whereas Stephen King's CARRIE is primarily about the conflict of a young girl with other females, both her mother and her high-school peers, telekinetic Final Girl Tina is a "daddy's girl" brought into conflict with one of horror-cinema's foremost "momma's boys."  A flashback, which takes place at Jason's Crystal Lake stomping-grounds, reveals how young Tina's powers burst forth one day when she sees her father strike her mother during a quarrel, and not for the first time.  Young Tina steers a boat out into Crystal Lake while her father harangues her to come back to the dock.  Tina's frustrated aggression lashes forth in a burst of telekinetic power that causes the dock to collapse, drowning her father.  We later learn that his body was never recovered from the lake, which seems more than a little improbable but proves necessary for the climax.

Seven years later, Tina is taken back to the cottage at Crystal Lake by her mother and her psychologist Doctor Crews.  Like Tommy Jarvis, Tina has been in and out of psychiatric institutions that have been unable to cure her trauma.  Crews, a believer in shock therapy, convinces Tina's mother to take Tina back to the scene of her trauma.  Ostensibly this is to give Tina some healing closure, but it later comes out that Crews wants to bring forth her telekinetic powers in full force.  He doesn't seem too worried that he might suffer the fate of Tina's father; apparently he's consumed with the desire to demonstrate her psychic powers to academia, though it's never very clear why he believes that this will lead him to fame and/or fortune.

Tina, whose unresolved feelings for her father are in play, senses a presence within the lake, and thinks that it's her father.  Her psychic powers awaken Jason, chained to the bottom of the lake at the end of Part Six, and he breaks forth, immediately going on a rampage.  Following a pattern cemented in Part Four, Jason menaces two houses: one full of disposable, party-happy teens, and one containing a loose approximation of a typical nuclear family, in which Doctor Crews' authority has taken the form of the Heavy Father.  Eventually both Tina and her mother break free from this authority, but for roughly half the picture Crews convincingly maintains that all of Tina's sightings of a hockey-masked killer are just hallucinations brought on by her guilt-complex.

Since "Carrie" takes up so much of the narrative, Jason's mythology isn't given much development here, beyond the motif of certain Jason-victims having a trauma that mirrors Jason's own.  I haven't attempted to chronicle the variety of murder-methods used in the FRIDAY films, but BLOOD has one of the weakest selections thus far, apparently in line with a producer's dictum to lessen the bloodiness of the franchise.  This can be seen in the executive decision to adumbrate the best murder-scene in the original film.  In the original release, Jason grabs hold of a sleeping-bag with a helpless victim inside, and bashes it against a tree six times.  In home-video versions, the bash-count is reduced to one smash, which seems a rather silly limitation for a series predicated on extreme violence.  In addition, I'll note that in this film and the next one, Jason has been given more ghoulish makeup during his brief unmasking-scenes. Perhaps this was a natural response to the fact that he'd been under the water for several years, but I suspect that the real reason was to keep selling new forms of ghoulish makeup to the FANGORIA enthusiasts.  That's not entirely a bad thing, since those fans supported the Jason franchise, but I personally just didn't like them.

I suppose one could make a very loose case for viewing BLOOD as an "anti-patriarchy" film.  Tina's father tries to maintain his authority through violence, and is punished for it when Tina unleashes her witchy abilities.  Jason, who is archetypally more of a "son" than a "father," also uses violence, though it's not to establish any sort of authority: merely to satisfy his unquenchable anger against everyone who had a more normal life than he did.  Yet though Jason is repeatedly battered by all the objects Tina hurls against him-- including a fire that destroys the cottage where the original father-violence took place-- he isn't defeated by her psychic powers in a direct sense.  Instead, when during the climax Jason faces off against Tina at the Crystal Lake dock, Tina somehow senses the dead body of her father beneath the lake and calls him forth as a sort of zombie who drags Jason back into the water.  There's no elaboration as to why this stops Jason, though one must assume it works in the same manner as it does in the last film: it forces Jason to re-experience something like his original near-death-by-drowning, so that he again falls into an undead immobility.  One may view this as the "good father" of Tina's memories triumphing over the "bad father" inherent in Jason's masculine violence-- though Jason's violence lasts long enough to kill both Tina's mother and her other "bad father," Crews.

On a minor note Tina also vies with a nasty socialite for the favors of a hunky guy, which plot-thread has a loose resemblance to certain events in CARRIE.  But all of the teen-victims are thoroughly tedious cannon-fodder, so the film gets no mileage out of their psychological and sociological makeup.
Posted by Gene Phillips at 1:50 PM
Email ThisBlogThis!Share to TwitterShare to FacebookShare to Pinterest
Labels: combative dramas, the marvelous