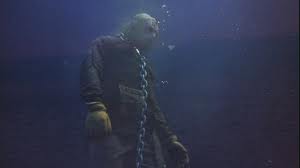 Some fans and critics don't like the development of Jason Voorhees into a near-invulnerable psycho-killer.  Since Jason the Uncanny Psycho became more and more unlikely to survive with each new film in the series, I don't mind at all.  JASON LIVES, written and directed by Tom McLoughlin, is easily one of the best Jason films.  Since it succeeds far more than previous entries in using the slasher-subgenre for purposes of grotesque humor, LIVES can be seen as one of the forerunners of the "metahumor" motifs later employed by SCREAM and its ilk.

Tommy Jarvis is once again the viewpoint character, but he's somewhat more complex this time out.  The last few seconds of the previous film, which suggested Tommy had finally donned the Hockey Mask of Hate, have been annulled in this continuity, and he's responsible for no deaths save those of the original Jason and Jason's impostor.  However, though he's released from the asylum, Tommy's still consumed with the desire to end his history with the mad killer.  Not satisfied with knowing that Jason is still dead, Tommy and a friend journey to the renamed town of Crystal Lake, seeking out Jason's grave, where Tommy intends to burn the killer's corpse to ashes.  In a development clearly borrowed from the Universal FRANKENSTEIN series (there's even a "Karloff Hotel" referenced later on), Jason's corpse is revivified by a chance lightning-strike.  Undead Jason rises from the grave and begins a new killing spree.

Tommy, riddled with guilt at having created a near unstoppable menace, tries without much success to enlist the help of the local constabulary.  In one of McLoughlin's strongest contributions, the young man promptly gets on the bad side of a bunch of dumbass cops, particularly the sheriff, whose pretty teen daughter Megan takes a shine to Tommy.  Megan is a member of a new group of camp counselors assigned to reopen the camp, which is scheduled to receive its first new campers in years: all gradeschool kids this time.  She also becomes Tommy's only ally against her own father, who plays such a butthead that it's a disappointment that he doesn't buy the farm.

As repetitive as it may seem to return Jason to the lake once more, McLaughlin makes it work, particularly when Tommy has the unexplained intuition that the only way to kill Jason is to make him drown again.  Once Jason has been made invulnerable, there's no longer a need to continue the "transference of evil" motif, but in a sense the new motif becomes that of finding some chink in the Hockey Horror's armor, even though in most entries he's fated to live through whatever climactic end the puny humans can devise for Jason.

The climax, which like Part Four owes more to action-suspense visuals than those of the pure horror film, is perhaps the strongest such set-piece in the series.  There's not a lot of psychological depth here compared to the original film, but to some extent the focus on "metahumor"-- in particular having the stoic murderer encounter such human absurdities as paintball games-- functions to compensate.
Posted by Gene Phillips at 2:40 PM
Email ThisBlogThis!Share to TwitterShare to FacebookShare to Pinterest
Labels: the marvelous