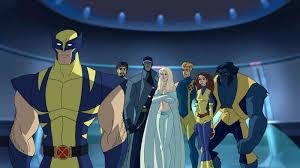 This one-season Nicktoons series, whose 26 episodes have been collected on a single DVD set, shows some intriguing differences from AVENGERS: EARTH'S MIGHTIEST HEROES, another superhero series also executed by Marvel's animation arm.

The AVENGERS series. although it did maintain some loose continuing plotlines, generally followed the model set by the Silver Age comic series.  Said series tended to follow what I term "closed arcs," which is to say, multi-issue storylines that generally terminated with some sense of closure.  This isn't to say that there were never any loose plot-threads left dangling, for such did appear both in the comics and in the 2010 cartoon series.

In contrast, WOLVERINE AND THE X-MEN quite naturally follows the example set by the X-MEN comic throughout its many incarnations: the example of the "open arcs."  X-MEN arcs, at least in comparison with those of Silver Age comics, tended to copy the example of television soap-operas to a far greater extent. Closure was rare, for no sooner did the heroes vanquish one menace than another cropped up in its place.  In following this example, WOLVERINE was true to its origins.

A problem with this approach is soon evidenced: since the animated series doesn't have the same quantity of stories to work with, WOLVERINE soon shows the strain of too many plots spoiling the broth.  The writer's borrow from a wide variety of periods in the X-MEN annals: the plot of the Hellfire Club (rather demurely renamed as "the Inner Circle"), the story of Magneto's Genosha  (pre-catastrophe), and even a swipe from the post-catastrophe period in which Grant Morrison worked.  The overall effect is that the multiple plotlines begin to fight one another instead of enhancing the overall progress of the heroes' journeys.

The idea of making legendary loner-hero Wolverine the leader of the team-- an idea apparently generated more by marketing than creative inspiration-- dominates the first ten or so episodes and then fizzles out, being usurped by other concerns.  It's clear from the writer commentaries that the scripters have a nerdish love of all things Marvel, which makes for a number of "cameo" appearances of obscure characters.  And on occasion it's fun to see them mix things up, like devising a romance between hero Nightcrawler and villain Magneto's daughter the Scarlet Witch, which resembles nothing in the original stories.  But although the dialogue is sharp and the action is above-average, the convoluted plotting makes it difficult to relate to the supposed theme: the needlessness of the conflict between human beings and their mutant relations.  The writers also create false expectations by jamming in too many characters, as when they show Rogue in the first episode, after which she disappears for most of the series.  X-MEN EVOLUTION, which used fewer plots from the comics, nevertheless displayed stronger writing by virtue of keeping to a fixed selection of protagonists.


Posted by Gene Phillips at 1:34 PM
Email ThisBlogThis!Share to TwitterShare to FacebookShare to Pinterest
Labels: combative adventures, the marvelous