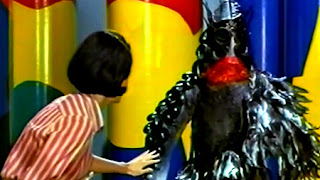 
I guess the best thing I can say about this 1967 Amicus SF-outing is that this is what THE LAST STARFIGHTER might look like if filmed for a $1.98 budget.

I'm certainly no snob with regard to low-budget metaphenomenal films, not after all the BOMBA and JUNGLE JIM films that I've reviewed, giving them their due when they succeed despite their budgetary limitations.  TERRORNAUTS, though, doesn't have a decent idea in its empty head.

One review argued that this was one of the first films in which a team of scientists-- whose organization is given the risible name "Star Talk"-- are trying to contact intelligent life through radio communication.  Be that as it may, these Brit characters are paper-thin stereotypes, making it almost impossible to identify with their noble aspirations.  Lead male Joe Burke gets a jot more development than either his two fellow scientists or the two comedy-relief characters who go along for the ride.  As a child Burke had a strange vision of an alien world: a vision brought on a brief exposure to an alien artifact.  Because the artifact is destroyed beyond recovery, Burke can only search the heavens for proof of extraterrestrial intelligence.

Just as Star Talk's funding is about to be yanked away, Burke and his colleagues (one of whom is his girlfriend Sandy) manage to make contact with an interstellar intelligence.  The unknown alien reacts quickly: sending a spaceship that yanks Star Talk's entire building off the Earth and away to a technology-filled asteroid.  (The film derives from a Murray Leinster novel, THE WAILING ASTEROID, which I may have read but remember nothing about.)  While the Earthpeople wander the asteroid, they are subjected to bizarre tests, one of which includes their dealing with a monster (seen above) that is easily one of the most cockamamie cinematic creatures of all time, perhaps even eclipsing the "diving-helmet gorilla" of ROBOT MONSTER.

Suffice to say that the humans pass all the tests, despite getting no help from the comedy-reliefs.  This accomplishment proves that they've capable of rational thought, and they receive presents, such as a ray-gun weapon, as rewards from the automated test-givers.  They soon learn that there had been a living caretaker of the asteroid facility, but he has died, which may explain why they never get a proper briefing on their reason for being here.  Fortunately, they stumble across the answers through various accidents, one of which teleports Sandy to the very planet of which Joe Burke dreamed.  After a violent encounter with some savage natives, the scientists learn that an interstellar space-fleet, which previously caused the destruction of the asteroid's makers (I think), is now headed for Earth.  Burke and his fellows then activate long-dead weapons and manage to blast the interstellar fleet into dust (hence my LAST STARFIGHTER comparison).  Then the Earthpeople manage to teleport back to Earth, where they themselves achieve the status of "aliens" when they land in France rather than England.
I imagine that some viewers may enjoy the catchpenny effects of TERRORNAUTS purely because they are so transparently phony, but I was largely bored because the characters were such tedious ciphers.  I felt sorry for Charles Hawtrey, an excellent comedian from Britain's CARRY ON films.  The other actors merely parroted their lines and went through the motions, but Hawtrey seems to be mildly regretful, as he was thinking, "Give me something funny to do, already!"
Posted by Gene Phillips at 3:15 PM
Email ThisBlogThis!Share to TwitterShare to FacebookShare to Pinterest
Labels: combative dramas, the marvelous