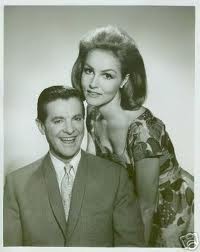 The above publicity photo is interesting in that it's composed so that one of the stars-- who receive co-equal status in the show's initial credits-- looms over the other one.  In one of the DVD commentaries, it's suggested that Bob Cummings-- an aging star renowed for several movies and one successful TV series-- was uncomfortable in playing a "straight man" to the real star of the show, Rhoda the Robot (Julie Newmar).  For one reason or another, Cummings did not even finish out MY LIVING DOLL's only season of 26 episodes, and for the last six one of the other actors had to assume his character's duties as keeper to a literal-minded, troublemaking robot.

On some occasions actor conflict may enhance a teleseries, as each actor vies for greater exposure.  However, producer Jack Chertok's show-- put together following the ratings success of his MY FAVORITE MARTIAN-- was so poorly conceived that it didn't allow the actors any potential for growth.

I'm not a great fan of MY FAVORITE MARTIAN, as I've usually found its scripts more repetitive than those of my more favored fantasy-sitcoms of the period, BEWITCHED and I DREAM OF JEANNIE.  Still, MARTIAN was well-conceived in one sense.  The show gave actors Bill Bixby and Ray Walston a strong relationship: Walston was the avuncular "Uncle Martin," a super-powered Martian constantly drawn into meddling in the life of the young man who had given him shelter on Earth.  Bixby's character Tim in turn might have been continually flummoxed by his strange visitor from another planet, but the scripts made clear that he enjoyed being the only guy on his block with a bonafide Martian for a roommate.  Over time the scenario evolved enough to communicate a genuine affection between this very odd couple.

One commentary claims prior to Cummings' signing the producers attempted to get Efrem Zimbalist to play psychologist McDonald.  Someone like Zimbalist, whose image suggested stuffiness and reserve, would probably have been a better choice than Cummings, who had become familiar to TV audiences as a womanizer in the 1955-59 series LOVE THAT BOB.  Cummings' McDonald, upon having the custody of the recently constructed Rhoda thrust upon him, never seems even slightly intrigued with the thought processes of a humanoid robot, even though his character is supposed to be a psychologist. 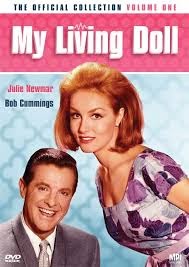 In early episodes-- at least those of the eleven extant episodes on this DVD collection-- McDonald leers and half-drools at the statuesque assets of Rhoda-- so much so that he apparently doesn't trust himself alone with her, and asks his sister to stay with them as a chaperone.  In extant episodes, she never actually does so, though.  The show's lascivious attitude soon gives way to diffidence, and  McDonald becomes a babysitter saddled with an unpredictable-- and powerful-- infant.  Of the two attitudes, the latter could have been played to better effect than the former, since there wasn't much chance that a 1964 teleseries would have delved into man-robot love after the fashion of BEWITCHED's mortal-witch romance.  But to make the latter approach work, Cummings' McDonald would have to seem like he had some concern as to whether Rhoda learned or did not learn whatever lessons he tried to teach her.  Most of the time, McDonald treats Rhoda like an inconvenient piece of furniture.  Supporting characters, who of course are not in on the big secret, are given a pat story about Rhoda being a niece of McDonald's friend, but neither McDonald's sister nor the guy across the hall who falls for Rhoda generate any strong humor from their interactions with Rhoda.

While it was necessary that Rhoda should at least begin the series as a traditional emotionless robot, the writers weren't necessarily compelled to keep her at a complete status quo.  Yet they did so: Rhoda maintains a deadpan disinterest in the vagaries of human behavior.  Perhaps the writers thought they had to keep the robot inhuman so that "she" would continue to misinterpret situations on a regular basis.  But the decision to give Rhoda no curiosity cut the show off from a wealth of potential comic situations.  To be sure, Newmar does a nice job exploiting her dancer's body by devising comic (and often sensuous) bits of physical behavior for Rhoda.  However, these aren't enough to make up for the lack of good character interaction.

A few of the extant episodes show potential.  Though McDonald isn't as much a womanizer as the character of LOVE THAT BOB, a similar attitude appears when he claims, in the first episode, that Rhoda might be an example of a great new innovation: "a woman who keeps her mouth shut and does what she's told."  But subsequent episodes don't follow up on this "battle of the sexes" potential.  The episode "The Love Machine" is one of the few episodes to pursue this theme, but Rhoda is reduced to a minor part while the main action deals with McDonald badly advising a young man to be masterful with his date.  Naturally the young guy's date walks out on him, uttering the oddball line of dialogue, "I hear they freed the serfs 100 years ago!"  I can well imagine that the writer was actually thinking of the Emanicipation Proclamation-- which really was about 100 years prior to 1964-- but that he changed "slaves" to "serfs" because the matter of American slavery wasn't precisely the subject matter a light fantasy-comedy could assimilate.  Yet even here, one wonders: why even bring in slaves or serfs, when it would have been easier to speak of women getting the right to vote?

Probably the extant episode that makes the best use of Rhoda's talents is "My Robot, the Warden."  This puts McDonald in a subservient position for once, since he foolishly tells Rhoda to keep him confined to their apartment so that he'll finish writing an important article.  Naturally, then, McDonald needs to leave and Rhoda won't let him.  This episode was mildly funny, but alas, most of the stories show the same one-note repetitive quality I find in MY FAVORITE MARTIAN.  I have my doubts that any of the unseen episodes are much better than this selection.

The most I can say for the show is that it's a pleasant curio of  its time. And anything with Julie Newmar is worth at least one look.

Posted by Gene Phillips at 2:42 PM
Email ThisBlogThis!Share to TwitterShare to FacebookShare to Pinterest
Labels: the marvelous