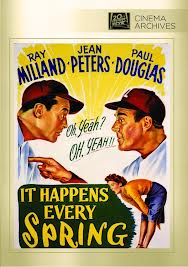 
It's practically guaranteed that any time you see a Classic Hollywood film-title that sounds vaguely risque-- IT STARTED WITH EVE, HER HUSBAND'S AFFAIRS, or the one under consideration here-- it's usually a fake-out.  In this case, though customers may associate "spring" with those things to which "a young man's fancy" turns, this time "it" merely means the baseball season.

Romance is involved, though.  Professor Vernon Simpson (Ray Milland) wants to marry his fiancee Deborah (Jean Peters), but he doesn't make much dough as a university teacher.  Deborah's father, the dean of the college, also frowns on such an impecunious union.  Vernon hopes that he can make his bundle by devising a new chemical that will repel termites from wood. Instead he produces an un-reproducible substance which, when applied to the surface of a baseball, makes it swerve away from a wooden bat.

Vernon, who also happens to be a nut for baseball and the St. Louis Cardinals, gets a brilliant idea: to take a sabbatical from college while the prof joins the Cardinals as their new pitcher.  Every time he  applies his "dipsy-doodle doo" to the ball, he strikes out all batters.  He leads the Cardinals toward imminent victory, much to the amazement of veteran players like his crusty roommate Monk (Paul Douglas).

There are the usual comic complications.  Deborah wonders at Vernon's prolonged absence, and through a typical misunderstanding thinks that the professor has turned to crime (which, in a sense, he has).  Vernon stresses absolute secrecy about his past, for his first consideration is not winning for the Cardinals, but making the money he needs for his marriage.  Near the climax Vernon almost runs out of his special goop, but in one of the film's few funny moments, he finds some of the goop in an unusual place, wins the game, and retires from baseball with all the money he needs.  Neither his fellow players nor the public at large ever knows of Vernon's unique "spin" on pitching, but the dean does learn, and he and Deborah both heartily approve of Vernon rooking the Great Unwashed who devote tons of money to their sports entertainment but almost nothing to higher education.

At this point, this simple, moderately amusing film seems to cribbing its ethics from James Thurber's THE MALE ANIMAL, for it's never suggested that it's in any way immoral to use special skill-enhancing substances to "fix" the game in favor of a particular team.  Indeed, the dean's speech at the end suggests that he thinks this type of cheating is fully justified.  Admittedly, though, a lot of comedies allow weak protagonists to win fights or games against stronger opponents using non-kosher methods, so SPRING is nothing new.  But given that Vernon is a baseball enthusiast, it's surprising that the thought of cheating in a game of skill never crosses his mind.

Today it would be impossible to make a film with SPRING's most impossible premise.  This isn't that someone could cause baseballs to swerve away from bats, but that anyone with a double-identity could become a million-dollar pitcher, avoid the spotlight of publicity, and then return to some bucolic family life without anyone ever finding out about his checkered past.  Even in 1949, I don't imagine anyone believed that tall tale.
Posted by Gene Phillips at 2:35 PM
Email ThisBlogThis!Share to TwitterShare to FacebookShare to Pinterest
Labels: the marvelous