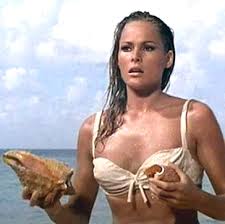 
It's interesting that Eon Productions chose to adapt DOCTOR NO as their first James Bond film.  In doing his fifth and six novels in the Bond series, author Ian Fleming repeated the same pattern he'd followed in his first and second entries.  CASINO ROYALE, a fairly realistic novel, ends with Bond debilitated by injury and torture, while in LIVE AND LET DIE he decides to compensate by going after a virtual "supervillain."  The fifth novel FROM RUSSIA WITH LOVE, also realistic in tone if not content, ends with Bond almost perishing from poison. In DOCTOR NO he takes a "rest cure" and promptly encounters yet another supervillain.

The supervillain angle may have informed Eon's decision to adapt the sixth novel.  While most of the Fleming Bond-oeuvre falls into the domain of "the uncanny," DOCTOR NO is the only novel that barely edges into the category of "the marvelous," by virtue of the mastermind's use of a radio-disruption device with which he confounds American missile systems.  The film, keeping true to the source novel, keeps this sole marvelous element, but as I've noted in other reviews, the Bond films would make increasing use of marvelous devices by both the titular agent and his adversaries.

In contrast to Eon's jumbled adaptation of LIVE AND LET DIE, the film is remarkably true to the source novel, sticking close to most of Fleming's scenario.  Obviously some things had to change: Quarrel, Bond's Cayman Island ally, was introduced in LIVE AND LET DIE, but for ease of storytelling he becomes a first-time acquaintance in NO.  This Quarrel is also in the employ of American CIA agent Felix Leiter, a familiar Bond-ally also originally introduced in LIVE AND LET DIE, but who did not appear in the novel and whose only role in the film is to inject an American presence for that audience.  But the two most significant characters in the novel, as in the film, are Bond's love-interest Honeychile Ryder and his nemesis, the half-Chinese, half-German Doctor No.

Not surprisingly, while both novel-characters are given far more elaboration than one might expect of an escapist espionage novel, the film reduces them down to basic plot-elements.  In the novel Honeychile is an admirable portrait of a "wild child," a young woman who chooses to live apart from human society, but who naturally falls for Bond's mature charms.  Ursula Andress' physical portrayal of Honeychile remains a visual hallmark of the series, in that the producers have her rise from the sea like Aphrodite-- a necessary change from the novel, where Bond first sees Honeychile lying mostly nude in the sand.  The film's Honey, while not a shrinking violet, is not as intelligent or resourceful as the novel version, who actually frees herself from one of Doctor No's traps and runs into Bond while both are escaping the villain's thugs.  The film's Honey seems more like a transparent sex-fantasy than like a character in her own right.  This matches with Bond's other sexual peccadillos in the movie, one of which involves the agent sleeping with a woman before betraying her to the local officials.

The cinematic Doctor No also has a certain cachet, thanks to the smooth performance of Joseph Wiseman.  Ironically, the film makes No over into a genuine mad scientist a la Fleming's main influence Fu Manchu. Wiseman's doctor is responsible for maintaining an atomic reactor to power his radio-disruptor, and atomic contamination, not gangland vengeance, is responsible for his artificial hands.  The novel's version is, ironically enough, "no doctor;" he merely takes that title to influence others with his authority.  By the time filming of DOCTOR NO began in January 1962, Fleming had published THUNDERBALL in 1961, which introduced the politically neutral criminal organization SPECTRE.  Allegedly Fleming wished to distance himself from having so many villains tied to Communism. The filmmakers plainly wished to do the same, since this Doctor No identifies as an agent of SPECTRE and claims that his talents were turned down by both the East and the West.  Like the novel version he makes substantial use of a "swamp tank" dressed up like a dragon in order to drive off trespassers, but the film version of the villain lacks the original's sadism.  The novel's doctor seems to have no passion for males or females-- a sexual trait Fleming had already excoriated in his FROM RUSSIA WITH LOVE villains-- but Fleming's No displays a subdued fetish for torture.  In its original release the novel received considerable criticism for its depiction of sadism and torture, but the film foregoes this: Eon's Doctor No is all business.  Most of the racial elements of the Fleming novel are nullified as well.

Lacking the novel's detailed characterization, the film's greatest asset is, unsurprisingly, Sean Connery's Bond, who manages to remain charming and empathetic despite his brutal manner.  In an early scene Bond shoots an enemy agent who has made a futile effort to kill Bond with an empty gun, and I've already alluded to 007's sexual betrayal of a female adversary.  This is not to say that the novel's Bond is incapable of such acts, but on the whole he tends to kill only when necessary, and he at least has some reservations about bedding young Honey-- though of course, he does.

One lamentable omission, which could never have been filmed given the movie's budget, is the detailed and logical manner by which Bond escapes No's prison and turns the tables. In the novel this is a grueling endurance-contest in which Bond just barely manages to survive the doctor's torture-gauntlet; in the film he escapes imprisonment with ridiculous ease, making the doctor look rather less than formidable.

The novel is also replete with rich descriptions of its Jamaican locale, which the film only invokes to minor effect.  I've noted in this essay how the villain of LIVE AND LET DIE, Mister Big, is equated with "the beasts of the sea," and the same is true of the novel's Doctor No.  It's certainly not a coincidence that early in the novel Quarrel introduces Bond to a black acquaintance nicknamed "Pus-Feller" because the man was known for having wrestled an octopus.  Late in the novel, part of Bond's long escape-ordeal forces him to duplicate that feat by killing an octopus set to devour the remains of No's victims.  Naturally Eon's Bond fights no octopi.  But strangely enough, the minor character "Pus-Feller" does appear in the first half of the film-- where his name is "explained" by the fact that he once wrestled alligators!

Posted by Gene Phillips at 2:56 PM
Email ThisBlogThis!Share to TwitterShare to FacebookShare to Pinterest
Labels: bizarre crimes (u), combative adventures, diabolical devices (u), freakish flesh (u), the marvelous