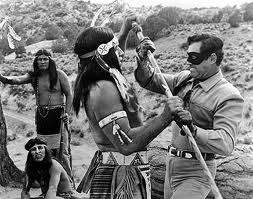 
Modern comics-mavens like to view Superman and Batman as diametrical opposites, with the former representing bright optimism and the latter dark pessimism.  One could argue that they were preceded in this by two radio-heroes launched by radio producer George Trendle, with the Ranger debuting in 1933 and the Hornet in 1936, just two years before the publication of Superman.

The Ranger, the man who wears a mask but constantly manages to convince righteous people of his honesty, is obviously the more optimistic figure.  The 1956 LONE RANGER film, an attempt to launch the hero and his Indian companion to the big screen as the low-budget teleseries was winding down.  On the whole the series makes a good transition, largely thanks to the good associations of Clayton Moore and Jay Silverheels, and to more intense action-scenes.

As in the second and last film of the new cinematic Ranger, the script centers upon the injustices visited upon Native Americans by white men.  In this case, a rapacious rancher named Kilgore (Lyle Bettger) has learned that there's silver beneath the sacred mountain of a local tribe of Indians. In order to gain access to the silver, Kilgore schemes to incite an Indian war, in part by hiring thugs to dress up as Indians and commit crimes.  The Ranger and Tonto must find evidence of Kilgore's evil deeds while simultaneously keeping the more volatile Indians-- particularly a muscular brave named Angry Horse (Michael Ansara)-- from declaring their own war.

The script isn't nearly as nuanced as that of the sequel LOST CITY OF GOLD, and Kilgore is a very flat and uncharismatic villain, one not in the least humanized by the presence of his wife and child.  The fight-scenes are extremely well handled, though.  The Ranger has a one-on-one battle with Angry Horse that easily puts all his TV battles to shame, and toward the climax the hero even sustains a gunshot wound.  Tonto acquits himself just as well: when town bigots try to divest him of his gun simply because he's an "injun," the brave knocks white men left and right for nearly five minutes before he's overpowered.  The Ranger also has an exciting scene rescuing his partner from hanging.  But overall the Ranger remains a strong mediating force between white and red men, suggesting an optimistic outcome for both-- even when moderns know that things didn't turn out so well for the red man. 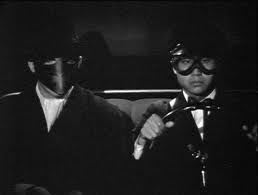 The Green Hornet, OTOH, doesn't just wear a mask but also creates a criminal persona in order to lure gangsters into his web.  This puts the hero at permanent odds with the authorities, and apparently the hero's willing to suffer these slings and arrows, perhaps having faith in his superior (albeit merely uncanny) technology: the super-fast car "the Black Beauty" and his special knockout-gas gun.  He like the Ranger also has a partner/confidante, his Korean driver Kato, but Kato doesn't get much action in this serial.  In one scene where Kato knocks out a crook, the polite Asian apologizes afterward.  The Hornet, played by hefty Gordon Jones, looks impressive in his frequent brawls with his opponents, all of whom are mundane racketeers with no great distinction.

To be sure, the actual adventures of the Hornet are no more "pessimistic" than were those of early Batman.  However, in this serial the Hornet's origin suggests an emotional tone not unlike the Caped Crusader's survivor-guilt.  In the first episode, newspaper manager Britt Reid-- who is carrying on the newspaper inherited from his father, implicitly still alive but retired-- doesn't listen to advice suggesting that he should investigate racketeer influence at a local mining-operation.  Shortly after this bit of negligence on his part, a mine collapses and kills several miners because racketeers supplied substandard building materials.  Immediately after this, Reid decides to launch a personal crusade against crime as the Green Hornet.

What's interesting is that though the script sets up the potential for the hero to be grief-stricken by his culpability, the serial avoids any direct admission of Britt Reid's guilt.  The Hornet's quest isn't seen in terms of compensation; it's just something any decent man would wish to do. Still, there's a mild similarity in the serial's origin-story to that of a much later arthropod hero, the Amazing Spider-Man-- though the later hero loses a person dear to him due to his negligence, while the nascent Hornet's neglect only costs the lives of men the publisher does not know. Still, it's significant that the Hornet is born out of guilt and a failure to emulate his paternal ideal, as his secretary repeatedly emphasizes to Reid.  The deeper motive is dropped almost as soon as it is raised, just as the adventures of Batman rarely returned to the scene of that character's inner trauma. External action ruled the ethos of the day in adventure-fiction, but it could be said that the Hornet, unlike his more optimistic predecessor the Ranger, suggests the way things would evolve down the superhero road.

I should add that there's one major thematic difference between the origins of the Lone Ranger and of Superman: John Reid is severely wounded by the ambush of his posse of Texas Rangers, while little Kal-L isn't even aware of what's going on when he's rocketed clear of the dying planet Krypton.  However, the upshot of both characters' isolation from their ingroup are de-personalized by the way both become virtual icons.  The Ranger becomes bonded to a Native American and both become a symbol of mythic brotherhood, with Reid's wounding and even his history quickly forgotten.  Superman is bonded to the people of Earth as their angelic protector, and he goes through ten years of adventures before he feels any anguish about Krypton's demise.  The Green Hornet and Batman have their mythic aspects as well, but there's less of a sense that they are myths made flesh; their mundane lives are never entirely obliterated by their heroic roles.
Posted by Gene Phillips at 3:38 PM
Email ThisBlogThis!Share to TwitterShare to FacebookShare to Pinterest
Labels: combative adventures, diabolical devices (u), outre outfits (u), the uncanny