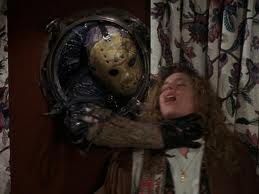 
Though the script for JASON TAKES MANHATTAN is a scattered one, it has some decent psychological moments despite clunky direction and too many characters for its own good.

One of the script's most interesting conceits returns to the "transference of evil" motif that dominated many of the early films, and does so by implicitly rewriting the FRIDAY continuity since the original film.  Fans will recall that Part Two asserted that Jason never actually drowned in Crystal Lake, despite his mother's unshakable conviction that he had perished due to the neglect of the camp's sex-happy counselors.  Parts Two, Three and Four all assert that Jason never drowned: that through some legerdemain he ended up living alone in the woods survivalist-style, worshipping the skull of his dead mother after she's killed in Part One.  Jason stays dead for Part Five and is revived as an undead creature in Parts Six and Seven, but at no time does he actually drown, though he may have experienced the fear of drowning.

Part Eight, instead, assumes that at some point Jason drowned as a small child.  The story begins once again in the locale of Crystal Lake, on a boat manned by two sex-happy students.  In between bouts of lovemaking, the boy tells his girlfriend an adumbrated history of the FRIDAY franchise, mentioning Mrs. Voorhees' rampage as well as claiming that Jason drowned as a child but somehow came back-- though there's no explanation as to how he came back as an adult. Adult Jason is once more on the bottom of Crystal Lake, in the same somnolent state he was in at the end of Part Seven, though of course there's no mention as to how he came to be there.  The boat's anchor drags an electrical cable into contact with the Hockey-Mask Horror, and he arises to kill the two teens.

Instead of looking for new victims on land as he usually does, for some reason Jason's kill-craze takes a nautical turn as he stows away on a cruise-ship bound for New York.  (For some reason the name of the ship is shown to be "Lazarus Panama," though the ship is only going from New Jersey-- the location of the fictional Crystal Lake-- to New York.)  As it happens, the ship holds a bevy of students, all under the aegis of a very unlikeable authoritarian teacher, Charles McCullough.  One of those students is McCullough's orphaned niece Rennie, to whom McCullough is legal guardian due to the death of her parents in a car accident.  Like many other FRIDAY protagonists, Rennie has a traumatic relationship to Jason's iconic history, though Rennie has no memory of her trauma; she only experiences an extreme aversion of water.  Because of this aversion she doesn't want to join her fellow students on the cruise ship, but she forces herself to do so in defiance of her stifling uncle.

McCullough is a Heavy Father after the fashion of Doctor Crews from Part Seven.  He's so rigidly repulsive that even when he does something relatively moral-- as when he refuses to give a female student a passing grade when she offers to sleep with him-- the viewer still doesn't like him any better.  When the subplot about Rennie's fear of water is disclosed, the Big Reveal is that he threw grade-school Rennie into the waters of Crystal Lake in an attempt to teach her how to swim.  But here too he seems not to care about Rennie's welfare; the suspicion is that he takes these extreme measures-- including mocking her about drowning "like Jason Voorhees"-- because he has a buried desire to sadistically control everyone in his sphere.

The interaction between Rennie and her Heavy Father is a good deal more interesting than Jason's shenanigans aboard the aptly named Lazarus: many horror-fans deem this the worst FRIDAY film due to the many bloodless and unimaginative kills.  (The most interesting shipboard scene is when Rennie drives off Jason by stabbing him in the eye with "Stephen King's pen!") At least a third of the film deals with Jason's shipbound rampage, making one wonder how the ship manages to get to New York while most of the crew is being killed off.  But Rennie, her boyfriend, McCullough and a few others manage to get off the ship in a lifeboat and steer themselves to the Big Apple.  Jason, undeterred  by water under certain circumstances (i.e., whenever the writer so desires), follows them.

Some fans were bothered by the fact that the film heavily advertises Jason's venture into Manhattan but offers only a few piddling set-pieces.  As soon as the escapees arrive in New York, they're immediately held up-- surely the outsider's archetypal notion of New York's burgeoning criminality.  Jason also visits the subway and a deli, and terrifies some gang-bangers by showing them his monstrous face.  These are unimaginative scenarios but I have seen much worse.  There's greater suspense in trying to figure out why Rennie keeps having visions of Jason-as-a-child even as adult Jason keeps chasing her down.  Eventually, shortly before Jason helpfully kills McCullough, Rennie experiences a memory breakthrough.  After her uncle tossed her in the lake, child-Jason materialized in the water and tried to drag young Rennie down to a watery grave.  Young Rennie is rescued by the man who endangered her in the first place, but not until McCullough is killed by Jason does he truly realize that he's tampered with the supernatural.

As for Rennie, she's "the one who got away," like Chris in Part Three.  The implication-- to the extent that director Rob Hedder's jumbled script holds together at all-- is that child Jason really did drown as established in Part One, but that somehow adult Jason is a manifestation of that spectre.  This is confirmed in the big finale, wherein Jason chases Rennie and her boyfriend down into the New York sewers.  By extreme dumb luck, the sewers are about to be subjected to a "toxic waste" flush, and the protagonists manage to leave Jason behind in the muck.  The toxic muck-- symbolically, the formidable waste-products of renowned pollution-center New York City-- purges the adult spectre of Jason, leaving behind the corpse of young Jason, the boy who drowned.  For good measure, Hedder even gets a little metaphysical, throwing in a quick shot of lightning flashing down from the heavens to zap the Statue of Liberty, as if both God and Lady Liberty finally decided to take a hand in Jason's (temporary) demise.

MANHATTAN is, without a doubt, a big mess that doesn't deliver the thrills Jason-fans expected.  However, messy though it is, I like particular scenes in it, which is more than I can say for Parts Three and Five.

Posted by Gene Phillips at 3:02 PM
Email ThisBlogThis!Share to TwitterShare to FacebookShare to Pinterest
Labels: the marvelous