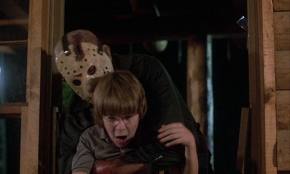 
Some critics regard FINAL CHAPTER as the real conclusion of the FRIDAY series, even though it was later continued by other means.  On the DVD commentary the director, writer, and editor all agree that they were instructed to kill Jason Voorhees for real.  At the same time, the writer attests that some of his more extreme ideas for the death of Jason-- having the fiend's head blown up or split open-- were shot down by producers.   That ambivalence may have cued the filmmakers to leave open a potential new avenue for the return of Jason, or at least his moneymaking icon.

While I wasn't overly taken with this psycho-slasher by director Joe Zito, it's a huge improvement over his 1981 slasher THE PROWLER.  The characters aren't any more complex than in any of the earlier films, but the script allows for a few touches of humanity, as when little-kid protagonist Tommy finds himself "sandwiched" by his mom and his sis.  It's also interesting that despite the tendency of FRIDAY-filmmakers to assert that they followed the slasher-craze in a slavish fashion, they break from the "final girl" pattern that dominates the first three films, simply through the addition of grade-schooler Tommy Jarvis.

It's true that the general pattern stays the same.  Directly following the events of Part III, which concluded with Jason getting an axe in his neck, his body is transported to a hospital near the killer's usual Crystal Lake stomping-grounds.  This is the first time Jason recovers from a wound that ought to kill a non-supernatural man.  The supernatural is not yet evoked, though, so so one must presume that everyone's favorite hockey-masked hobgoblin was simply not as severely wounded as it appeared.  Jason kills a couple of hospital employees and slogs back to the general area of Crystal Lake.  However, since Jason has just finished off a new group of victims at the camp proper, Jason proceeds to seek fresh game in a couple of nearby suburban houses: one of which harbored the three family members mentioned above, while the other contains a gaggle of party-hearty teens.

The variety of victims-- both horny teens and a stable family-- makes Part Four much livelier than Part Three, and Zito and Co. develop some outstanding set-pieces, not only for Jason's bloody murders but also during the attempts of "final girl" Trish (Tommy's sister) to escape and/or kill the psycho.  However, the film's viewpoint character is young Tommy.  At a point when Jason is about to kill Trish, Tommy apparently "channels" the strategy used by heroine Ginny from Part II, and shaves his head so that Jason will think of Tommy as some sort of kindred freak.  This made more sense in Part II, where the script foregrounded Jason's absolute devotion to his mother, and was therefore half-deceived by Ginny's imposture.  Still, it's a viscerally appealing scene if it doesn't make much sense, and gives Tommy the honor of being the first protagonist who definitively kills the original FRIDAY menace.  Corey Feldman, not yet a "name" at the time, contributes a vivid performance as Tommy, and stuntman Ted White makes one of the more formidable Jasons.

The final scene suggests that Tommy has been so traumatized by the night's events that he may well become the new Jason.  In Part Five, the script does follow up on Tommy's trauma in a roundabout fashion.  This device is the only reason I rate the film's mythicity as "fair," because it follows up on the "transference of evil" motif established at the end of the 1980 original.

Posted by Gene Phillips at 1:45 PM
Email ThisBlogThis!Share to TwitterShare to FacebookShare to Pinterest
Labels: perilous psychos (u), the uncanny