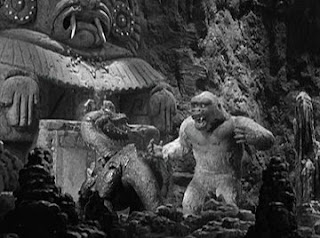 Debuting just nine months after the April release of KING KONG, THE SON OF KONG illustrates why it's so rare for one to find films-- or works in any other medium-- that take on the status of myths.

As I said in my review, the original KONG provides a virtual Rorschach's test to its viewers because everything in it is super-charged with significance, and yet nothing is explicitly related to conscious themes.  SON is just the opposite; the film is to its original as Little Kong is to his father, when Denham observes that the ape is "not a patch off your old man."  Everything in SON seems mechanically thought-out.  That's not to say it doesn't have its pleasures, but it's not mythic.

The film depicts Carl Denham in New York, dodging the many creditors hounding him with bills and/or lawsuits resulting from the late King Kong's rampage.  In conversation Denham claims to be sorry for all the lost lives and property damage, but during most of the picture he seems more sorry for himself; that his big plans to become an entertainment mogul went south.  Later in the film he'll evince some sympathy for Kong's death as well, though one could see this as a narcissistic impulse, since some critics argue that Kong is a "id-double" for Denham; the part of himself he keeps hidden.

Thanks to a chance meeting with Englehorn, the captain of the ill-fated Skull Island voyage, Denham escapes his drab New York reality and returns to the "scene of his crime," the South Seas-- but not for purposes of adventuring.  He and Englehorn scrape by carrying cargo, until Denham repeats another incident from his earlier history: he takes an interest in a young girl.  In contrast to Ann Darrow, whom Denham lures into show business, Hilda is already a performer-- albeit a bad one-- in a show owned by her father. The show also includes trained monkeys, which suggests Denham's next exploit.

Enter an evil-id figure far less prepossessing than Kong: the aptly named "Helstrom," who sold Denham the map to Skull Island but did not take part in the voyage.  Helstrom and Hilda's father are both social drunks, but when they quarrel, Helstrom knocks down the older man and leaves him to die when a fire breaks out.  Hilda is devastated but intends to accuse Helstrom to the local law.  At the same time, with her father dead and the circus destroyed by fire she has no means of support.  When Denham shows her a friendly interest, she gravitates toward him-- a "meet-cute" that might not have taken place but for Helstrom's murderous machinations.

Helstrom needs fast transport to a new port to avoid the local constables, so when he runs into Denham and Englehorn, he tells them a phony story about a great treasure on Skull Island.  Reluctantly the two men resolve to return to the island of prehistoric perils.  Unbeknownst to Denham, Hilda stows away on the ship because she senses Denham's empathy for her, but she doesn't know Helstrom has come aboard the same ship.

The sailors' fears of the dangers of Skull Island are exacerbated by Helstrom, who hopes to become the new captain.  This incident shows the film's propensity for "conscious themes," for though the overall story has nothing to do with the Communist Revolution, the script makes one of the sailors a thoroughgoing Marxist who tosses around words like "bourgeoise."  Strangely, as the mutineers divest themselves of everyone who might be "over" them-- Denham, the captain, Hilda, and Helstrom, the would-be new captain-- they boast that they'll exist in a world "without captains."  In this sequence one may see a small conflict between the world of the entreprenenur, who depends on being able to exploit capitalistic opportunities, and the world of the Marxist, who wants to close down all such avenues.  Given the fate of Daddy Kong, one can't entirely dismiss the Marxist's desire for reform, even though the script pretty much does.

With nowhere else to go, the four refugees pilot their boat to Skull Island, though their first landing is denied them by the natives Denham and Englehorn met on their first voyage.  The natives, just like the denizens of New York, blame the adventurers for the depredations of Kong.  Eventually the boat lands elsewhere on the island, and the foursome began to make their way through the primeval environment.

Denham and Hilda, though not exactly poised to become a romantic couple, are together when they come across-- and save the live of-- the 12-foot-tall albino ape, Little Kong.  There's no real evidence that the young ape is King Kong's heir, nor is their any evidence of how he was conceived.  But by saving Little Kong's life, Denham somewhat feels as if he's evened the score for his acts against the King of Skull Island.  Little Kong becomes bonded to the humans who saved him, which has mixed results.  On one hand, he saves them from at least two monsters; on the other hand, he also imperils them when he curiously destroys Denham's rifle.

The foursome's sojourn on the island only last long enough for Denham to find out that Helstrom's lie was actually the truth: a fabulous treasure does exist in a local temple.  Typically enough, no one in the film even inquires as to whether these treasures might belong to anyone on the island, though in Denham's defense, the idol in the temple doesn't look like anything in the village of the dark-skinned locals.  Once Denham has the treasure-- or part of it-- Skull Island is then conveniently rocked by a mammoth, island-destroying earthquake.  Helstrom dies in the jaws of a diplodocus, while the whole island and its native inhabitants are devoured by the ocean. Hilda and Englehorn manage to get the boat clear of the catastrophe, and Denham is only saved because Little Kong holds him out of the water long enough for his friends in the boat to rescue him.  It's as if the island exists only to render up its treasure to allay Denham's economic woes.  Once that goal is accomplished, the whole island is sucked down into nothingness.  And although Little Kong's death is sad, the extinction of the whole island is sadder.  It's one thing for Denham to sin against King Kong, in trying to exploit him for gain. But it seems a greater crime that the filmic universe of SON OF KONG should expunge King Kong's whole realm, just so that Denham can pay his bills and have his own romance-- if one can even call such a chaste relationship a "romance."

While KING KONG is a combative drama, SON OF KONG is not.  Little Kong does have a couple of enjoyable fights with local beasts in protecting his new friends.  But the narrative does not build to a climactic battle, but to an act of self-sacrifice-- one that, in keeping with the film's beginning, seems all about validating the ego of the main character.

Posted by Gene Phillips at 2:37 PM
Email ThisBlogThis!Share to TwitterShare to FacebookShare to Pinterest
Labels: the marvelous