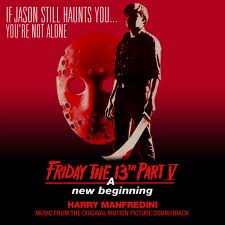 Because FINAL CHAPTER made a lot of money, the franchise's producers naturally okayed a new entry in the saga of Jason, slice-happy stalker.  As noted in the previous review, the script left a loophole open, so that the signature hockey-mask might be worn by a new psycho-killer.  However, though the script does bring back the character of Tommy Jarvis, it does allow for a certain amount of mystery as to whether Tommy has taken up the Jason role.

The scenario advances four years after the events of Part Four.  Tommy Jarvis is now a young teen, but his trauma has caused him to be transferred to various institutions over the years.  The fate of his sister and mother is not explained in either film, though an alternate ending reveals that the mother was one of Jason's (unseen) victims.  As he checks in with his new place of residence, a halfway house for the mentally disturbed near a woodsy area, Tommy has hallucinations that Jason has come back to life and is stalking him.  This seems to be the first Jason film to gravitate away from the Crystal Lake area, though it keeps the woodland setting that works so well for Jason's "hunter" persona.

A brutal murder takes place when one of the disturbed patients takes an axe to another.  There's no mystery about this slaying, but it opens the genie's bottle, and soon more patients are being murdered by a ruthless, hockey-masked killer.  Is it Jason, returned from the dead?  Or has traumatized Tommy assumed the role, as the end of Part Four suggested he would?

Without going into detail, it's neither.  The killings are serviceable and the mental patients-- some of whom are as randy as the standard "teen-kill" victims-- make an interesting change of pace. However, the director claims that his bosses told him to constantly goose the screenplay with either actual murders or "false starts."  This has the effect of making BEGINNING seem like a hyperactive child, and so gives the audience less time than ever before to empathize with any of the characters.  I suspect that since FINAL CHAPTER had made money, someone in the head office was leery of making money with the red-herring-killer approach, and misread the appeal of the FRIDAY series as being about nothing but constant shocks and scares.

The script does work in a "final girl" of sorts-- a minor "keeper" at the halfway house-- but she doesn't emerge as a distinct character.  Even more than in FINAL, Tommy is the central protagonist (once the audience learns that he's not the new Jason), and he's almost entirely responsible for the defeat of Phony Jason.  However, he's further traumatized once again, and the film once more puts teen Tommy in the position of being the new Hockey-Mask Murderer, though he's not seen to definitively kill anyone, except in a dream-sequence.  Slight though the ambivalence was, it proved foresighted, for the relative failure of BEGINNING proved that Jason was a character whose mythic origins had become important to fans, and not just an empty mask into which one could stick any old psycho.
Posted by Gene Phillips at 2:16 PM
Email ThisBlogThis!Share to TwitterShare to FacebookShare to Pinterest
Labels: perilous psychos (u), the uncanny