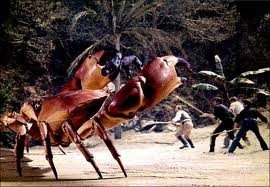 
I haven't read Jules Verne's MYSTERIOUS ISLAND and haven't read his OFF ON A COMET novel for many years, so I can't review either of the 1961 films adapting these two works with the novel in mind, as I did with Richard Fleischer's 20,000 LEAGUES UNDER THE SEA.  But whatever the differences of the films from their source material, they do accurately reproduce one of Verne's most important themes: the ideal of brotherhood.  Fleischer's LEAGUES fails to translate the profundity of Captain Nemo's misanthropy, his anger at man's inhumanity to man, and prefers to give audiences a Nemo who is a deep-dyed fanatic. The 1961 sequel to the adventures of the Captain hits closer to the mark, with Herbert Lom's quiet intensity coming closer to Verne's Nemo than James Mason's saturnine hostility.

To be sure, the novel is a sequel to two Verne works, but naturally the film doesn't attempt to bring in plotlines from Verne's IN SEARCH OF THE CASTAWAYS.  The film begins during the American Civil War, with Union soldiers escaping a Confederate prison in an observation ballooon.  The three soldiers-- one of whom is black-- also take along a war correspondent and a Confederate soldier who is able for a time to pilot the balloon.  A storm blows the balloon all the way to an uninhabited island in the Pacific, where, unlike the book, the castaways encounter giant creatures like the giant crab seen above.

Verne's theme of brotherhood receives simple treatment here, as the five men become a rough fraternity, forgetting the conflicts of the Civil War.  The fraternity becomes something like a culture when two women, one young and one middle-aged, are washed ashore from a sunken ship.  There are minute suggestions of the possibility of romance, but not too many, as the emphasis here is on the rigors of survival, the mystery of the giant creatures and the presence of another being, apparently helpful, upon the island.  Toward the end it's disclosed that the third factor explains the second: the castaways' helper is Captain Nemo.  Only he and his ship have survived the debacle of the original LEAGUES (the Disney film being roundly ignored, of course). Having taken refuge on the island, Nemo has conducted experiments with animal gigantism, having some idea about feeding Earth's hungry millions and bringing about brotherhood in that manner. However, the ticking clock of the island's active volcano destroys both Nemo's long-range plans and the castaways' community.

ISLAND makes no attempt to be anything but a good basic all-ages adventure. Nemo's misanthropy is touched upon but not his history with slavery.  We see him torpedo a slaver ship that comes near the island but his rage against them is not personalized.  The black Union soldier Neb is respectable enough, showing no racially motivated characteristics, but he doesn't sustain much interest as a character, and neither do the others.  All of the characters' conflicts are resolved so quickly that one suspects they're merely filler, meant to take up time between their fights with Harryhausen animations.  ISLAND is reasonably exciting, but never rises to the level of the compelling. 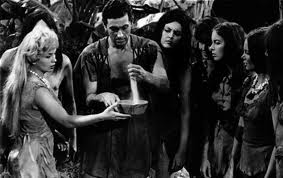 VALLEY OF THE DRAGONS, adapted from OFF ON A COMET, isn't exciting, but it's engaging on the level of "good dumb fun."  This Columbia production is much sparser in terms of original effects: many are recycled from ONE MILLION B.C., and the original FX are risible, particularly a puppet-like giant spider.  Whereas the novel deals with a passing comet that drags a number of Earthpeople onto its surface-- a surface already inhabited by dinosaurs and cavepeople from a previous brush with Earth-- in VALLEY only two quarreling men, Denning and Servadac, are sucked up to the comet's surface by its passage.  The two men are in the midst of a duel when the comet grabs them: understandably, their quarrel comes to an end when they must join together for survival.  The growth of their brotherhood spreads to the inhabitants of the comet when Denning and Servadac manage to foment peace between two quarreling tribes of cavepeople.  However, the two heroes are well compensated for their peacemaking efforts, as each of them meets a hot young cave-babe and sets up shop as civilizing forces in Cometville.

Though there's nothing special about the script, writer-director Ed Bernds keeps things hopping and never allows VALLEY to become dull.  That's not to say it generates much excitement, in contrast to MYSTERIOUS ISLAND.  But it's modestly engaging for all that.
Posted by Gene Phillips at 3:54 PM
Email ThisBlogThis!Share to TwitterShare to FacebookShare to Pinterest
Labels: the marvelous