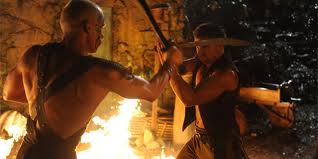 
The most I can say of the Australian-made fantasy SINBAD AND THE MINOTAUR is that (a) it's an acceptable time-waster, and (b) it's not one of SYFY's endless CGI-idiocies, even though there is a big stupid CGI monster in it.

The basic idea here is, "what if Sinbad the Sailor operated like Indiana Jones?" This Sinbad, played by one Manu Bennett, is primarily a treasure-hunting thief.  He somehow finds out that a magician named al-Jibar possesses a scroll leading to the solid gold head from the long-vanished statue, the Colossus of Rhodes, and he steals it.  Bennett's Sinbad is supposed to be a lovable rogue, whose thievery is excusable because he's stealing from an evil, soul-sucking sorcerer.  While liberating the treasure map he also liberates a princess from al-Jibar's harem, and so the chase is on.  Just as Indiana Jones claimed that he was "making it up as I go along," Sinbad's favorite refrain, whenever one of his crewmen reproaches him for his carelessness, is to say, "Details, details."

There is potential interest in that MINOTAUR, unlike a lot of Sinbad films, makes a token effort at recapitulating real-world archaic history, however badly.  The film opens with a prologue relating the fall of Crete and the rule of King Minos at the hands of the Greeks of the isle of Rhodes, worshippers of the sun-god Helios.  Before he dies Minos bemoans the way the gods have cursed him with a false son, the Minotaur, though the film skirts around the grotesque facts relating to the Minotaur's conception.  It's intimated that there's some sort of ritual cult built around the Minotaur, but Crete is destroyed and the cult apparently faded from the scene.

A thousand years pass, taking us to the time of Sinbad-- though in truth it would be closer to three thousand years to get from the era imputed to King Minos to that of Sinbad's period during the Abbasid Caliphate.  Sinbad tells his skeptical crewmates that Minos' men avenged themselves on the Greeks of Rhodes by destroying the Colossus and stealing its golden head.  The map will supposedly show them how to find this treasure in the labyrinth of Crete, which the sorcerer wants as well.

There are assorted little pleasures, however familiar, in MINOTAUR.  Sinbad and the princess get into the usual "meet-and-fight-cute" mode.  Al-Jibar is nicely played by Steven Grives, familiar to American audiences from his recurring role as an equally vile villain on the teleseries BEASTMASTER. The sorcerer has a servant who acts like a vampire but whom he calls an "al-ghoul," and Sinbad has a pretty lively fight with this undying creature.

On the minus side, Sinbad seems like a dunce, while the crewmen and the princess are nonentities.  There's not only a big scary minotaur, but also a minotaur-cult whose acolytes have horns and other monstrous features.  Are they the result of the sun-god's curse upon Crete, or are they the spawn of the Minotaur after the manner of the creature's own birth?  Who knows?  In a well-written narrative the Minotaur-cult might have been the climax of the movie.  Here it's just more grist to keep the mill turning.

Far from the best, but not the worst.  May be easier to watch if one intones the words, "At least it's not SHARKNADO."
Posted by Gene Phillips at 3:00 PM
Email ThisBlogThis!Share to TwitterShare to FacebookShare to Pinterest
Labels: combative adventures, the marvelous