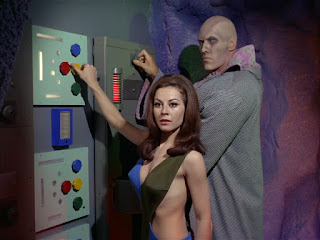 "Little Girls" was both produced and broadcast after "The Naked Time," the first episode in which Christine Chapel showed up, but "Little Girls" seems much more like an introduction of the character in comparison to her arbitrary appearance in the earlier episode. Wikipedia asserts that Chapel's character was simply inserted into the original script for "Time" to give his girlfriend Majel Barrett a recurring role, which would explain why Chapel's infatuation with Spock proves seems poorly foregrounded.

There's no trace of Chapel's passion for Spock in "Little Girls," and it would be tempting to suppose that "Time" transpires after this episode, as it would be easier to explain Chapel's love for the Vulcan as a rebound affair. The backstory for Chapel isn't much better in this episode than in the last: we're simply told that she's (1) engaged to a famous exobiologist, Roger Korby, who's been incommunicado on the planet Exo III for five years, and that she (2) could have had a distinguished career in exobiology, but gave it up to join Starfleet. It's been suggested that she hoped that someday the Enterprise would happen to get the assignment to investigate Korby's mission-- that of unearthing the remnants of a long-extinct civilization. It's just as well that this rationale wasn't put into words, since the Federation had a lot of starships that might've received the same assignment, and the idea that Chapel's ship would just happen to be chosen would have seemed an insane exaggeration of coincidence.

When the ship approaches Exo III, it initially appears that the assignment will be an anti-climactic one, for Korby speaks to the ship by radio and enthusiastically invites Chapel to descend-- though he wants only Kirk to come with her. Kirk is given a strong respect for Korby's scientific contributions so as to justify the captain complying with this request. Kirk's decision to indulge the doctor costs him two of the crewmen he beams down with him, as well as almost spreading a plague of androids to all parts of the Federation.

Chapel and Kirk encounter Korby's assistant Brown, who strangely doesn't remember Christine. And when it turns out that Korby has also acquired a very slinky assistant named Andrea, there's not much doubt that Korby has met the fate of many a scientist: let them get away from society for too long and they go mad for one reason or another. It does make one wonder why Chapel, if she was engaged to Korby five years ago, didn't choose to go with him on his expedition, but her career-choices are not investigated in depth.

The spectre of danger looms when Kirk and Chapel also meet Ruk. a towering android left over from the days of Exo III's now-extinct inhabitants-- following by the discovery that both Andrea and Brown are androids, created by the leftover alien technology. Korby has brought Kirk down alone so that he can try to persuade the captain to use his ship to disperse the scientist's androids throughout the Federation-- and if Kirk won't cooperate, Korby can just make himself a new Kirk, one that will do what he wants.

This is a decent "thrill-ride" episode, but the Robert Bloch script, undoubtedly rewritten by Roddenberry, is pretty shallow on the characterization horizon. Because the story puts so much emphasis on the unsurprising Big Reveal-- that Korby is himself an android, having transferred his mind into such a body when his original form was crippled-- there's no time to reflect on his missionary zeal to take over the Federation and, essentially, remake it to be more in his image. Kirk and Korby go back and forth a little on the necessity to protect humankind from its own evils, and Korby's indefensible position might've assumed a tragic air had it jibed with his experiences as a medical researcher. The thing that most hurts the episode, though, is that Christine Chapel is a dull, vacillating character. At one point, she tells the captain (actually the Kirk-android) that she couldn't possibly betray her fiancee, despite the fact that she knows he's planning to take over the Enterprise, to which service she's also sworn fealty. Given my viewpoint that Majel Barrett wasn't much better an actress than Chapel was a character, it seems feasible to me that Roddenberry didn't want to strain her talents by forcing her to, you know, do the right thing in this situation.

On the plus side, Kirk gets to express some mild racial baiting against Spock, albeit in a good cause, as if to make up for Spock's statements in "Naked Time."


Posted by Gene Phillips at 3:28 PM
Email ThisBlogThis!Share to TwitterShare to FacebookShare to Pinterest
Labels: combative dramas, the marvelous