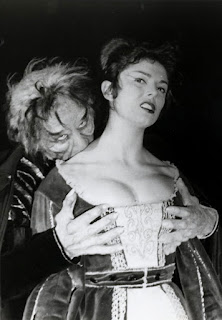 
When I recently re-screened Renato Polselli's VAMPIRE AND BALLERINA, I noted its use of two vampires-- a beautiful female and a (usually) ugly male-- I wondered if it might have been influenced by Mario Bava's BLACK SUNDAY, which also came out in 1960 and also featured a similar vampiric duo. However, a check at IMDB discloses that Polselli's film came out about three months before Bava's-- which makes the timing probably too close for any influence on Bava by Polselli, either. Possibly both are picking up, albeit belatedly, on tropes used by Riccardo Freda's I VAMPIRI.

Though BALLERINA is limply plotted, it does get across one sociological trope common to many vampire films: the encounter of the blase modern world with the supernatural domains of Old Europe. After an establishing scene in which a local girl is exsanguinated by an unidentified vampire, the film focuses on a traveling troupe of sexy ballerinas who visit the region where the vampire's castle stands. (Presumably this is Italy, since most of the characters have Italian names.) Two blonde dancers, Luisa and Francesca, have their respective boyfriends Giorgio and Luca along for the ride, and the viewer doesn't get any sense that there's any trouble between any of them that might open the door to a demon lover. Indeed, Francesca and Luca become engaged during their sojourn. However, when the two girls wander off the track, they must take shelter from a storm in the castle. They meet Countess Alda, who naturally has a portrait of a lookalike ancestress on her wall, and who has a really ugly servant named Herman. Herman gets Luisa alone and vampirizes her, and after that it's just one routine vampire-trope after another, until the two boyfriends finally get wise to the goings-on and exterminate the two bloodsuckers via the sunlight solution.

The cinematography is far better than the plot, though the film's erotic elements are fairly tame, and even Alda's attempt to seduce Luca is confined to verbal suggestiveness. The best aspect of the story is that Polselli keeps the viewer guessing as to whether Herman or Alda is the true master of the situation, since at the closing each of the vampires accuses the other of being the real evildoer. Since Alda's the one with the portrait on the wall, it seems a little more likely that she vampirized Herman at some time in the distant past, and that he began dominating her at some later point.

The most mythic aspect of the narrative appears close to the beginning. An old fellow playing host to the dancers tells the girls that vampires began as "evil men" who indulged themselves in cannibalism, until an "angel of the Lord" changed them into vampires. This isn't a very Christian-sounding legend-- particularly since ordinary peasants suffer from the depredations of blood-drinkers-- and it's possible that Polselli loosely borrowed this idea from the myth of Lycaon:


n the most popular version of the myth, tested Zeus' omniscience by serving him the roasted flesh of Lycaon's own son Nyctimus, in order to see whether Zeus was truly all-knowing.
In return for these gruesome deeds, Zeus transformed Lycaon into a wolf, along with his offspring