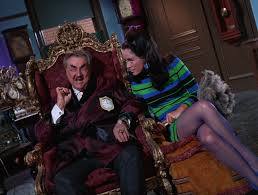 
For comics-fans it would’ve proved gratifying had the one BATMAN ’66 episode co-scripted by a bonafide comics-writer numbered among the best of the series. But such was not the case. In collaboration with writing-partner Charles Sinclair, Bill Finger—unofficially credited as the co-creator of Batman, aswell as of much of Batman’s mythology—only turned out a middling episode of the camped-up character.

The Clcck King, essayed by Walter Slezak, is another in a long line of series-villains who has no particular reason for plotting crimes around a particular theme. All the viewer knows is that in his hideout Clock King surrounds himself with clocks, that he uses clock-devices to commit crimes and that he makes a lof of “time” puns. As it happens, prior to this episode Bill Finger had created at least three “clock-themed” villains for DC Comics—two for Batman tales, and a third for a solo Robin series—but Clock King doesn’t seem based on any comic-book original. Still, since this is a second-season episode, he does get a lot of nifty gadgets to play with—including a giant hourglass that serves as the obligatory deathtrap for the Dynamic Duo.

Script consultant Lorenzo Semple may have encouraged Finger and Sinclair to follow some of the dominant trends of the time, such as the tendency to play up Batman’s celebrity in Gotham, thus mirroring his sudden prominence on the TV screen. Thus “Crimes” includes a draggy scene in which Batman and Robin take a lunch at a burger joint that serves “Batburgers.” Far better, though, is the episode’s spoof of the phenomenon of Pop Art.

Though the artistic movement itself hearkens back to the 1940s, Americans tend to associate it most with such 1960s developments as Lichtenschtein’s appropriation of comics-panels for his paintings. The idea of Pop Art, if not its substance, may have played a minor role in the producers’ decision to spotlight an ironic version of a comic book hero. In “Crimes,” Clock King performs a heist at a traditionally art-gallery, where a news-announcer informs viewers that the gallery has always been devoted to “art that has stood the test of time,” but that the gallery has capitulated to modern sensibilities by holding an exhibition of Pop Art. Clock King enters the gallery, disguised as a well-known Pop Artist, though the fictional artist just happens to bear a striking resemblance to real-life surrealist Salvador Dali. And though Clock King brings in a clock-device designed to immobilize bystanders, he also takes time to mock a painting, showing cartoony versions of Batman and Robin surrounded by melting clocks, also a reference to Dali.

Clock King also becomes one of the many villains to stage a raid on Wayne Manor, which doesn’t have that much impact on the plot but undoubtedly saved the expense of building an extra set. Finger and Sinclair produced a decent enough episode, not one of the series’ best, but certainly not among the worst.

Posted by Gene Phillips at 11:37 AM
Email ThisBlogThis!Share to TwitterShare to FacebookShare to Pinterest
Labels: combative adventures, the marvelous