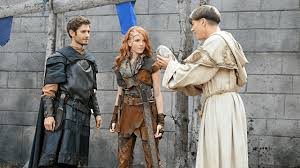 There’s no shortage of film-fans who prize franchise-sequels—BRIDE OF FRANKENSTEIN, TERMINATOR 2-- equal to or better than the film that started the franchise. I’m not aware, though, of many “second sequel” films that have earned such accolades.

DRAGONHEART 3 isn’t any sort of bold new re-thinking of the premises of the previous two films, and its story would’ve been difficult to envision without the previous stories in the series. It’s just a good formula-film that executes its premise better than the first two entries. As I noted in my review of the other films, the first DRAGONHEART suffers from a clumsy sort of humor, loosely modeled on the 1971 film SKIN GAME, while the first sequel proves overly juvenile in tone.

Both of those films took place in a vague period of medieval England. Director Colin Teague and writer Matthew Feitshans anchor their prequel of the franchise in ninth-century Britain, some centuries after Roman rule. Though the Romans are gone, they’ve left behind such markers as Hadrian’s Wall, a dividing-point between the northerly lands of the savage Pict tribes and the lands to the immediate south, inhabited by more outwardly sophisticated Britons. In addition to the southerners having been schooled in the ways of the Romans and of the knightly traditions of Arthur’s Camelot, this fantasy-history includes a race of intelligent dragons from the stars. Rather than being opposed to humankind as one sees in most archaic knight-tales, these star-dragons acted as tutelary spirits to Arthurian knights, even instilling in the early warriors the code of honor.

Main hero Gareth, an orphan of low estate comparable to Geoff in the second film, has labored for years in service as a knight’s squire, hoping to attain the status of valorous knighthood. But the code of knighthood has fallen on hard times, and the warriors that man the wall against the hostile Picts consider it their due to extort huge sums from the humble peasants. Though Gareth dearly wants to become a knight, he protests this inequity. The garrison’s cruel commander casts Gareth out of the compound into the northern wilderness, challenging the young squire to come back with some treasure to prove his worth.

While Gareth forages in the wilderness, a meteor crashes to Earth. Out of the meteor springs a huge dragon, and Gareth observes that within the remnants of the meteor are nine eggs of gold. A troop of Picts show up and attack the dragon, and Gareth briefly considers harvesting an egg for his own purposes. A Pict shoots Gareth with an arrow, but the dragon thinks that the young knight has protected the egg. The dragon, later named Drago, resuscitates Gareth by transferring a portion of Drago’s heart into the youth’s chest.

However, the Pict tribe has a sorcerer, Brude. He casts a spell that nullifies Drago’s power, except when the moon is high, at which point Brude can force Drago to serve him in destroying the southern Britons and their wall. Drago’s primary concern is to protect the eggs of the unborn dragons, and because of the sympathy between him and the knight, Gareth agrees to help Drago protect the eggs. The knight receives further aid from two friends he makes in the northern wilds: Pictish warrior-princess Rhonu, who bears a grudge against Brude, and aspiring Druid magician Lorne, who provides some of the comedy-relief (though, to be fair, Gareth is sometimes the butt of Drago’s humor).

There are some fuzzy parts in the script. It’s not that clear as to why Drago came to Earth with his brood, since he and his kind haven’t been there for centuries, nor why he possesses the ability to teach Gareth a skill called “shadow-jumping,” which involves teleportation from one shadowed area to another. Still, the story is admirably consistent to its theme: that Gareth must find some middle way between the unreasoning aggression of both northerners and southerners. Naturally, meeting a comely Pictish warrior-woman does a lot to humanize Gareth’s beliefs about the Picts, though the script doesn’t overplay the romance at the expense of the main plot. And though the theme is mostly about humans getting along, Drago had a much more interesting personality than either of his predecessors, perhaps because he mirrors the ideals of knighthood to which Gareth aspires.

The film’s only flaw is that, like a lot of second sequels, the budget doesn’t allow for heavy FX, so Drago doesn’t actually do all that much, even in the climactic battle. 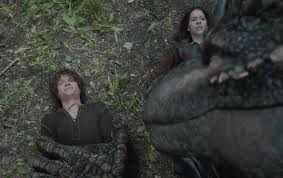 Unfortunately, though DRAGONHEART: BATTLE FOR THE HEARTFIRE is set in the same prequel-era, creative lightning did not strike a second time for writer Matthew Feitshans, nor for the new director or the new cast of characters.

Two generations have ensued since Gareth and his wife Rhonu united the northern and southern kingdoms of their corner of Great Britain. With the assistance of Drago—the dragon to whom Gareth bonded in the previous film, now voiced by Patrick Stewart—the king and queen have managed to bring about the rebirth of dragons. Not much is said about the restoration of an Arthurian knightly code, and one never sees any other dragons but Drago. However, the bonding of human and dragon is still fraught with peril. At the film’s statt, Rhonu has perished years ago after her dragon died, and now Gareth is at death’s door. Drago expects to perish when Gareth does, and is surprised when the king dies and he Drago yet survives.

Drago realizes that he still has a bond with a human; one of Gareth’s grandchildren. Gareth and Rhonu had a son, Walter, who fled court life and chose to live the life of a peasant. He married some unknown woman, who bore him twins, male Edric and female Meghan. Neither twin is aware of their kinship with Gareth, but both have a smattering of scales on their bodies, as well as unusual powers—Edric is as strong as four men, and Meghan can control (but not create) any form of fire. After Walter’s death, the siblings separated. Drago uses the bond to locate Edric, and though Edric repudiates the bond, he doesn’t reject the revelation that he’s now the king of this part of England.

Meghan, living in the lands of the Vikings, hears about her brother’s good fortune and invades England with a small army, led by Thorgrim. (Dina de Laurentis, daughter of the more famous Dino and sister of HEARTFIRE’s producer Raffaela, has a small part as one of the Vikings.) Meghan asserts that as Gareth’s granddaughter she has equal claim to the throne, and when she first meets Drago, she steals from him the Heartfire. In contrast to the exchange of hearts seen in the other films, this theft robs Drago of his flame-powers, and imperils his survival as well. Meghan’s enhanced power allows her to take over and to exile Edric. She then begins her rule, attempting, among other things, to empower women legally and martially.

After various complications, Edric sneaks back into the kingdom, hoping to save Drago’s life by stealing back the Heartfire. The siblings fight, and the Vikings turn against Meghan. Drago swoops in and saves the twins from death, but he, now acting as reluctant parent to the duo, becomes aggravated by their constant squabbling. He sets them down in the forest and challenges them to fight it out. It’s not much of a fight despite their respective super-powers, since despite their enmity neither one really wants to hurt the other one. Some family secrets are revealed, and the two youths at last join forces to kick out the Vikings and rule the kingdom wisely—though during the conflict Drago meets his maker.

The previous entry in the series took strength from being based in the history, however fictionalized, of conflicts between two tribes of Britons. This time, the kingdom is just a backdrop, and the invading Vikings could be Mongolians for all their identity matters to the story. DRAGONHEART 3 was about Gareth and Rhonu bringing their ethnic identities together in order to forge a stronger England. Edric and Meghan are never more than bickering siblings, weakly characterized and given a patchwork backstory.

Writer Feitshans might have done something better. Since he wanted the bonding to skip a generation, apparently he decided to expend as little effort as possible upon Gareth’s son Walter. The script gives him no solid reason for fleeing the lap of luxury to live as a peasant; the viewer is only told that he didn’t like the kingly life. Feitshans might’ve crafted a situation in which he rejected the world of kingship and dragon-magic specifically because the dragon’s death killed Rhonu’s mother. But this avenue remains closed.


One hears nothing of the mother of Edric and Meghan; she’s just the vehicle to bring the siblings into the world. Clearly the scripter got rid of the mother quickly, in order to focus on Walter, even though he remains a vague character at best. He’s appalled by the twins’ strange powers and becomes something of a tyrant to them, which leads to a clumsy “family secret”—Edric thinks Meghan killed their father with her powers, but someone else is the guilty party. Even this bit of melodrama is botched, since the characters of the siblings are so flat and uninvolving. The best I can say of the two lead actors is that they fit the bland characters perfectly. Whether the franchise can come back from this low point is anyone’s guess.

Posted by Gene Phillips at 12:36 PM
Email ThisBlogThis!Share to TwitterShare to FacebookShare to Pinterest
Labels: combative adventures, the marvelous