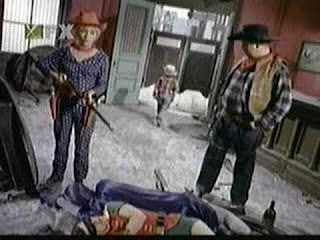 
It’s Stanley Ralph Ross up to “bat” once more, and he presents Bat-viewers with yet another sophomoric villain, the western-themed owlhoot “Shame.” Any viewers who didn’t guess that the villain’s name spoofed that of the hero of the 1954 western “Shane” would be clued in by the way Ross tediously spoofs the film’s signature line “Come back, Shane” throughout the episode.

Neither Shame nor any of his henchpeople have any particular reason for affecting a western theme, though early in the episode Batman credits the villain with a “bravado” like that of old-time outlaws. (However, the same could be said about most Bat-villains.) Like Riddler and Penguin, Shame has a case of Batmobile-envy, since in a previous outing Batman outraced Shame with the Batmobile’s superior engines. Thus one of Shane’s main aims in the episode is to build a better Batmobile—though this project doesn’t really have much effect on his big score: that of ripping off a herd of priceless breed cattle.

In order to put across a western vraisemblance, Shame makes his hideout in a defunct film studio, with a standing western set. While Shame and his men attempt to make their super-car, they meet an eight-year-old boy, Andy, who dresses as a cowboy but gets a disconcerting taste of real-life outlaws. After Shame swipes the boy’s radio, Andy spends a lot of time wandering around crying, “Come back, Shame”-- and though this routine gets old fast, Ross does make it pay off a little at the end, when Andy forswears cowboy-fantasies in favor of Batman-style superheroes.

Though the episode is slackly plotted, it does have a number of pluses, beginning with Cliff Robertson’s ornery perf as the guest villain. In the first fight-scene, when the heroes square off against Shame, his two henchmen and his henchwoman Okie Annie, Shame describes them as “three-and-a-half against two.” However, it’s the “half,” Okie Annie, who knocks out the crimefighters by dropping a chandelier on them: a rare feat of direct violence for a female character on this show. Both this fight and the concluding one get better-than-average choreography, possibly because western films were so famous for elaborate fisticuffs. The latter fight features an exchange in which the audience laughs with Batman rather than at him. Laughing Leo, a cheery car-saleman who’s been working with Shame, tries to avoid being hit with the old standby, “You wouldn’t hit a man with glasses, would you?” Batman astutely points out that Leo’s not wearing glasses, slugs him, and adds the insult, “Laugh that one off, Leo!”

“Come Back” is at best a mixed bag, but Shame did indeed come back for one more duel with the Caped Crusaders, though not until the third season.


Posted by Gene Phillips at 12:09 PM
Email ThisBlogThis!Share to TwitterShare to FacebookShare to Pinterest
Labels: combative adventures, the marvelous