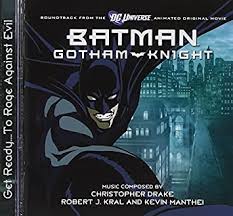 This Bat-anthology, with scripts from American authors and Japanese animation, proves once again that quantity is generally not superior to quality. In the space of ninety minutes, the producers sought to squeeze six stories—some of which are close to being vignettes. Possibly due to the constrictions of time, five of the six stories lack strong resolutions.

“Have I Got a Story to Tell You” consists of three street-kids who all claim to have witnessed Batman in action. Given that an episode of BATMAN: THE ANIMATED SERIES already plowed this shallow ground, this one is the most disposable.

“Crossfire” starts out well, from the POV of two experienced Gotham cops assigned to convey a prisoner to another location. One cop abhors Batman as a vigilante, while his partner is more ambivalent, unsure of the crusader’s motives but believing that the city has markedly improved from his influence. During the prisoner transport the cops get compromised by a pair of gangs. Batman rescues the officers, and—I guess that solves the problem?

“Field Test” involves Batman testing a Lucius Fox invention that deflects bullets, but the device doesn’t work to best effect during the hero’s next crime-busting operation.

“In Darkness Dwells” attempts to stuff two famous Bat-villains into one tale, even to the extent of rewriting Killer Croc’s origin to involve the Scarecrow. Batman, on the trail of an abducted Cardinal, descends to Gotham’s sewers to rescue the holy man from the Diabolical Duo. The re-designs of the two villains are poor and the action is incoherent.

“Deadshot” features Batman seeking to prevent the titular master assassin from claiming another victim. The only bright moment is a snatch of dialogue in which Batman, despite his distaste for guns, admits that he can understand the attraction of such weapons.

Only “Working Through Pain” has both a strong premise and resolution. Batman, suffering from a gunshot-wound while waiting for Alfred to rescue him, flashes back to an early period in his preparations for a crime-fighting career. As Bruce Wayne the hero journeys to India to learn the fakirs’ secrets of pain control. The fakirs refuse to teach him, but Wayne meets a young woman with the non-Indian name of Cassandra who persuaded the fakirs to teach her their secrets, and who accepts Wayne as a student. Cassandra, who has her own tale of tragedy, has an almost psychic awareness of the emotional pain Wayne seeks to master in addition to making preparations for the violent life of a crime-fighter. When some rowdy youths attack Cassandra, Wayne whips their butts in the video’s best fight-scene. This altercation, for vague reasons, spells the end of Wayne’s tutelage by Cassandra, who opines that his emotional pain is too deep for either her or him to banish. The story’s only flaw is a rather pat ending.

Though Kevin Conroy again voices the crusader as he did in BATMAN: THE ANIMATED SERIES, the anthology’s vision of Batman does not follow the earlier teleseries in showing the hero as capable of humor and compassion. These are hardboiled crime stories with an obsessed vigilante-hero, which is certainly a viable element in the Batman universe—but not one that receives good treatment here. Only “Working Through Pain” adds an interesting concept to the overall mythos, but that one tale is not enough to give the whole anthology more than a “fair” mythicity rating.

Posted by Gene Phillips at 12:49 PM
Email ThisBlogThis!Share to TwitterShare to FacebookShare to Pinterest
Labels: combative adventures, the marvelous