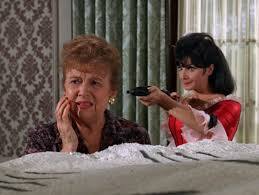 
Though “Hizzoner the Penguin” is the best Penguui script, “Penguin’s Nest” boasts the best Burgess Meredith performance. Meredith captured perfectly the Bird-Bandit’s enormous ego, and thus “Nest” is full of scenes in which he has his plans thwarted, resulting in numerous slow burns and squawking rants.

Once again the pompous bird has insinuated himself into high society, having managed to launch an expensive haute cuisine restaurant. Then the criminal genius makes what seems to be a dumb move: lifting a jeweled bracelet from Harriet Cooper’s wrist, right in front of her relations, as well as Gordon and O’Hara.

Bruce/Batman quickly deduces that, since the Penguii is not a clumsy crook, he must have a special reason for wanting to be sentenced to the state penitentiary. The reason, when revealed, is rather a thin reed on which Lorenzo Semple hangs all of Penguin’s other machinations. However, in this case I can forgive the thin plot, simply because the Penguin gets so many good scenes of frustration and fiendish counter-plotting. As Batman, Adam West gets to constantly counter Meredith’s furious complaints with dru wit—the climax being when he incarcerates Penguin not in the state pen, but in the city jail for a misdemeanor. “Think upon your petty sins, you bush-league bird!”

However, Batman’s jibe forces Penguin to up his game. Not only does he escape jail with Chief O’Hara as hostage, the wily bird sets up a double-deathtrap: a machine-gun ambush for the Dynamic Duo and death by electrocution for the Chief. Semple resorts to phony science to preserve the chief’s life, but it’s such a lively outcome that one can’t much complain.

Though Batman can’t prevent Penguin from being arraigned on serious charges this time, the villain comes up with a cockeyed defense of his actions, and a soft-headed judge lets him go free—much to the villain’s disgust. Semple also pokes fun at liberal do-gooder Warden Crichton, and Batman comes this close to telling him what a permissive dolt he is.

Sadly, the episode is then compromised with another needless insertion of Detective Alfred, who tries to pose as a criminal forger despite the fact that Penguin encountered Alfred back in “Fine Finny Fiends.” Penguin recognizes the butler, kayos him, and then comes up with a goofy plan to extort money from Bruce Wayne by baking his butler into a giant pie. By this time, it’s not even certain that Penguin is still attempting to get himself jailed, but it provides another excuse to use the Wayne Manor set, which is where Penguin and his goons are defeated. However, Bruce Wayne makes certain that when Penguin goes into stir, his grand plan for a prison hookup will come to naught.

Penguin’s moll Chickadee deserves mention as one of the most vicious henchwomen in BATMAN '66. Not only does she take a pot-shot at the Dynamic Duo, she threatens both Chief O’Hara and Aunt Harriet with her pistol before the redoubtable Harriet conks her. Perhaps needless to say, Batman doesn’t bother to give Chickadee a lecture on female decorum.
ADDENDUM: I belatedly learned that this TV script was partly based on a 1946 BATMAN comics-story written by Alvin Schwartz-- which story bore the same name, though naturally Semple added a lot of material not in the original tale.

Posted by Gene Phillips at 12:12 PM
Email ThisBlogThis!Share to TwitterShare to FacebookShare to Pinterest
Labels: combative adventures, the marvelous