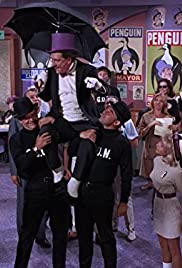 
Stanford Sherman’s script for “Hizzoner the Penguin” provided the strongest story for the Birdman Bandit in the show’s three seasons—though, very atypically, the master crook doesn’t have a hidden agenda. It’s as if Penguin, having observed how easy it was to fool Gothamites into believing he’d reformed in “The Penguin Goes Straight,” decided to apply that lesson to his foray into politics. As he tells the Dynamic Duo, “I can use all of my lowest, slurpiest tricks—and they’re all legal!”

Everything in the episode takes this broad approach to political satire, but Sherman’s script is clever enough to keep from repeating its barbs. As in “Penguin Goes Straight,” the Avaricious Avian has his confederates pretend to commit crimes, which he then foils—and the Gotham public eats the whole show up. After Penguin declares his candidacy for city mayor, the beleagured Mayor Lindseed asks the Commissioner to summon Batman—for the mayor feels that only Batman can best the villain at the voting-booth. After many modest blushes, the hero agrees to enter the political arena.

The sober-sided crusader attempts to run a clean campaign devoted to “the issues,” while Penguin relies on lots of ballyhoo, giving out free campaign and engaging the service of pretty girl performers (including the famed ecdysiast Little Egypt). Both campaigns use the services of three pollsters who generally tell each candidate whatever he wants to hear, and who carry briefcases that show their two-faced nature, with each briefcase reading one candidate’s name on one side, and his opponent’s on the other. (Near the episode’s end, they reflect that although they’ve washed out as pollsters, “we can still get jobs rating TV shows!”

Vile villain that he is, Penguin wants to be rid of the Duo more permanently. Thus a gang of his henchmen pretend to be a fraternal order who want to hear Batman speak, and when the crusaders show up, they get ambushed and stuck in a deathtrap. To twist the knife, Penguin shows up, but pretends to be a good citizen, waddling off to summon the police. However, the henchmen have no reason not to watch the heroes get dipped in an acid-bath, so their absence at the beginning of the second part is less explicable. But because they’re absent, it’s easier for Batman-- who happens to be wearing an acid-proof costume—to slip into the acid bath while shielding his face, and to free himself and Robin.

The highlight of the campaign is a witty parody of political conventions and the reporting thereon. During the candidates’ debate, they’re told that a large gang of thieves has attempted to hold up a jewel convention. Batman, Robin and Penguin charge into the building, but the heroes get the worst of it while Penguin looks golden, thanks to the fact that all of the thugs are on his payroll. During the battle, the reporters keep score of each candidate’s successes, all of which make things look good for the villain.

Nevertheless, Batman maintains an ironclad faith in the sensibility of Gotham’s citizens, and once again the Cowled Crusader is proven right. The episode’s only flaw is that Penguin doesn’t really have a backup plan when his primary scheme fails, and so his pathetic attempt to obviate the election results seems uncharacteristic of his intellect.

Posted by Gene Phillips at 11:56 AM
Email ThisBlogThis!Share to TwitterShare to FacebookShare to Pinterest
Labels: combative adventures, the marvelous