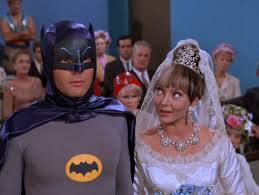 In Stanford Sherman’s creation of original villain “Marsha,” we see a harbinger of the out of-control silliness that would dominate the third season. I noted that Ma Parker was invented to play to Shelley Winters’ acting-strengths, but at least she played the role, however minor, with verve. The Queen of Diamonds was apparently designed to play to the sultry qualities Carolyn Jones brought to her most famous role, “Morticia” on TV’s ADDAMS FAMILY. But Morticia had style, and Marsha is just a bundle of man-killing clichés.

It’s unclear from the outset whether Marsha is a known criminal, or merely a celebrity known to be obsessed with diamonds (a “diamond-dizzy dame,” one cop calls her). The police set up a cordon around a diamond exchange as if they think she’s going to rob it. But when she strolls in with Chief O’Hara on her arm, no one tries to arrest her for taking a priceless diamond. Though she apparently has a reputation for enslaving men, neither of the main heroes seem to know anything about the way she does so, and she easily enthralls Commissioner Gordon as well, keeping him, O’Hara and some other victims in her vaguely Eastern habitat.

Batman and Robin pay a call on Marsha, and the villainess reveals her secret: darts infused with love-potion. She uses one on Batman, who almost becomes as ensorcelled as the other men, but he overcomes the potion by strength of will alone. However, while Batman and Robin fight Marsha’s gang of Turkish-themed servitors (including an imperturbable Woody Strode), Marsha manages to infect Robin, and he becomes her instant slave. Batman finds out that Marsha has a fierce, Goldfinger-like desire for all the diamonds in the world, and that she wants the big industrial diamond that powers Batman’s Bat-computer. Even for the sake of Robin, Batman won’t grant Marsha access to the Batcave, from which he’s supposedly forbidden all visitors (quite forgetting Commissioner Gordon’s little sojourn in “Death in Slow Motion”). Marsha then ups the ante by inducing Batman into marrying her—and for once, the brilliant crimefigihter can’t figure a way to escape the “deathtrap” of wedded bliss. Only a clever ploy by Aunt Harrier and Alfred saves the crusader from the matrimonial meance.

Temporarily free of Marsha’s demands, Batman manages to infiltrate her hideout and de-program Robin. Why didn’t he do that before? Who knows? All this folderol is bad enough, but as icing on this foul confection, it’s revealed that Marsha doesn’t even make her own concoctions, but gets them from her aunt Hilda, a crazy old chemist who dresses like, and believes herself to be, a witch. Hilda also tries several times during the episode to turn the heroes into mice or toads, and she’s persistently unsuccessful, just as the script is unsuccessful in getting any laughs from Hilda.

Still, Estelle Winwood gives the slight role of Hilda her all, which is more than one can say of Carolyn Jones. Apparently the basic idea behind Marsha was that of the femme fatale who could mesmerize men with the mere promise of sex, even without giving up anything. But Jones, though attractive, had no such entrancing qualities, and her character’s hauteur is no substitute for actual sex appeal. Regrettably, the character wasn’t consigned to the bin of one-shot opponents, but actually made a return appearance.

Posted by Gene Phillips at 12:06 PM
Email ThisBlogThis!Share to TwitterShare to FacebookShare to Pinterest
Labels: combative adventures, the marvelous