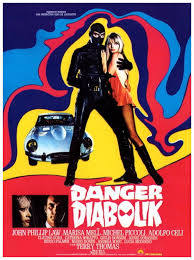 
In my review of the first FANTOMAS book, I gave the novel a rating of high mythicity. However, this was less because of the character of Fantomas than in response to the way other characters reacted to his criminal capers. Based on the first book, and on the handful of films I’ve seen, I don’t really see that particular supercrook’s appeal.

I have not read any of the original DIABOLIK comics, but the 1968 film-adaptation—at least partially based on original comics-stories—is a very different story. Of all the European feature-films that either adapted comics-features or just flirted with elements of the medium, DANGER DIABOLIK is the most successful.

It’s also one of the most successful films by director Mario Bava, who’s also credited as a scriptwriter on the project. Bava’s excellent design-sense wasn’t always matched by the scripts he either wrote or inherited. But even though DANGER was derived from three separate Diabolik stories—the film’s script never seems choppy or forced. I surmise that Bava, or someone else involved with the script, chose to use stories with a common theme: the attraction of money.

Of course, all films about thieves, gentlemanly or otherwise, involve money as a goal. DANGER, however, invokes “money as a myth.” Diabolik (John Philip Law) flies in the face of the thief who tries to avoid detection by committing at least some crimes in a cowl and bodysuit—but he never seems motivated merely by sheer gain. After Diabolik’s first crime, when he rips off a shipment of cash, he takes the loot to his underwater hideout. Then he and his cohort/girlfriend Eva (Marisa Mell) spread all of the bills onto a bed and make love amid them. It’s the adults’ version of Uncle Scrooge swimming through his horde of coins and cash, and there’s no mention as to what either Diabolik or Eva will use the cash for—if indeed they use it for anything but lovemaking.

One interesting consequence of Diabolik’s scandalous success is that his nemesis Inspector Ginko (Michel Piccoli) receives extraordinary powers to bring the master thief to justice. This power allows Ginko to put pressure on real, hardened criminals, so that he can extort one of the worst, Valmont (Adolfo Celi), into capturing Diabolik. The gangster uses his contacts to find and capture Eva, the better to maneuver Diabolik to his demise. However, in a dramatic turnabout Diabolik forces Valmont to come with him in rescuing Eva. Valmont tries to escape, but even when Diabolik shoots the evildoer, the master thief works money into the equation—for he shoots Valmont full of stolen emeralds, and later harvests the loot from the crook’s dead body.

DANGER is replete with other fine set-pieces, to say nothing of sporting one of composer Ennio Morricone’s best scores. But nothing surpasses the ending, in which the forces of law and order appear to triumph, and Diabolik is apparently entombed in a deluge of liquid gold. Yet the film promises that the apparently dead thief will rise and rob again—and though there were no Diabolik sequels, the character remains as alive as the viewer’s fantasy of stealing with the utmost style.

Posted by Gene Phillips at 12:18 PM
Email ThisBlogThis!Share to TwitterShare to FacebookShare to Pinterest
Labels: combative adventures, the marvelous