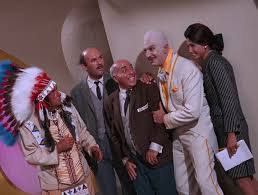 The first appearance of original-to-TV villain Egghead credits the story-idea to Ed Self, and the teleplay to Stanley Ralph Ross. Like most of Ross’s scripts, this one is full of self-conscious, often cornball humor rather than following the light touch of the camp approach.

Though Egghead doesn’t have a backstory as such, he takes on a little more literary life, given that he claims to be the smartest man in the world, though Robin considers the villain second best to his masked mentor. In contrast to many actors who had no experience in playing villains, Vincent Price had specialized in creating various fiends since getting “typed” as a horror-icon in the 1950s, and he had a particular genius for oily, mustache-twiddling villainy that perfectly fit the camp aesthetic pervading BATMAN. Egghead’s bald pate, yellow-and-white outfit, and habit of citing innumerable “egg-scrutiating” egg-puns make him one of the most memorable of the series’ original creations. He’s also the only villain who correctly deduces that Batman is Bruce Wayne, which leads to a trap designed both to kill Batman and to expose his secret.

In addition, Ross also come up with a better-than-average “big score” for the villain, even if it happens to be rooted in a form of chauvinistic humor no longer acceptable. For decades, Americans made jokes about how colonizing Europeans had hoaxed American Indians into ceding the rights to Manhattan for a pittance. Gotham City’s charter is barely more geneous, for the city’s founders gained the land from the local Native Americans in exchange for nine raccoon pelts, to be paid every five years to the tribe. However, by the time of BATMAN, the tribe has dwindled down to just one little Indian, Chief Screaming Chicken (Edward Everett Horton)—and since his tribe was that of the Mohicans, he is (wait for it) “the last of the Mohicans.” The most one can say of the jokes built around Screaming Chicken is that they probably were not intended to be mean-spirited. The writers’ main concern was surely to exploit the idea of Native American ownership of Gotham in order to complicate things for Batman and Robin. And though even Batman is a little hard-nosed about expecting the chief to remain faithful to the letter of the agreement, he does tell Robin a little story about how some citizen committed the faux pas of telling the chief to “go back to his own country.”

Since at the episode’s start Gotham is due to make their payment to Screaming Chicken, Egghead plots to block the payment, partly by offering the chief a better deal. The villain succeeds, and for some time local cops are unable to keep criminals from ravaging the city, contenting themselves with handing out parking-tickets. Egghead also bans the caped crimefighters from the city, but Batman reads the fine print in the charter, revealing that convicted criminals cannot administer Gotham. The crusaders arrive too late to keep Egghead from looting the Gotham Treasury—though the heroes manage to head off the villain by anticipating his need to stock up on eggs.

On a minor note, though Egghead seems to have something going with his henchwoman Miss Bacon, she’s more sophisticated than the average moll, being employed to record the villain’s exploits for posterity. When Batman chastises her, a woman of breeding, for falling in with a criminal, she merely comments, “Just lucky, I guess,”


Posted by Gene Phillips at 11:44 AM
Email ThisBlogThis!Share to TwitterShare to FacebookShare to Pinterest
Labels: combative adventures, the marvelous