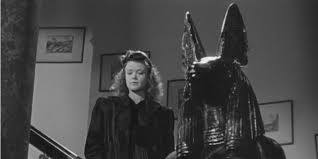 The works produced by Val Lewton have been so fulsomely praised that I tend to think some of his movies have been overrated. However, I can’t say that of the film that launched Lewton’s commercial success, CAT PEOPLE.

Reportedly Lewton’s bosses at RKO merely wanted the producer to come up with something to poach off the 1941 box-office of Universal’s WOLF MAN. There’s no way to know how dutifully writer DeWitt Bodeen studied the Curt Siodmak script for WOLF MAN, but it seems likely that he chose to build on Siodmak’s general approach. The earlier film sets up the viewer to believe that werewolf-transformations are real as soon as Bela Lugosi implicitly turns into a wolf. Yet, throughout much of the film, Siodmak carefully builds up the conflicting emotions of the characters as they strive to cope with their encounter with the impossible. Bodeen approaches CAT PEOPLE in a similar manner, but avoids confirming that woman-to-cat transformations are possible until the end of the film.

Bodeen also reverses Siodmak’s “fish out of water” situation vis-à-vis the protagonist. Larry Talbot, the quintessential “ordinary Joe” American, finds himself overwhelmed by the weird beliefs of pagan Europe, as represented by the gypsies and transmitted through the Christian residents of a Welch town. Here, the protagonist is Serbian-born Irena, who has emigrated to America, living there for years without making any friends or becoming in any way Americanized. A chance encounter at a zoo brings her friendship with, and later marriage to, an “ordinary Joe” named Oliver. Like Irena, Oliver seems curiously frozen and devoid of real history, marking himself as an “American innocent” when he claims, “I’ve just never been unhappy.” Indeed, without even realizing it, he has a “work-wife” relationship with co-worker Alice, and she’s evidently been comfortable enough with that status that she’s never tried any womanly wiles upon Oliver. But Irena moves Oliver to new levels of emotion, and thus the two are married—though the script tiptoes around the implication that they are husband and wife in name only.

Irena’s sexual reticence traces back to her roots in Serbia, which boasts a distant pagan heritage overruled by more recent Christian conquest. When Oliver first visits Irena’s apartment, he’s stricken by a Serbian sculpture, showing a panther being speared to death by a Christian warlord named King John. Irena explains that in some towns, pagan practices went on, including that of human beings changing into feral cat-creatures. Irena, apparently as ambivalent about Oliver as she is about her adopted country, nurtures the belief that if she has sex with a man, she may turn into a panther and kill him.

During the early months of marriage, Oliver becomes less and less reconciled to his exotic wife’s peculiarities, and Alice finally professes her love to him, implicitly wanting to compete with Irena at last. Thus Oliver consults a psychiatrist recommended by Alice, one Doctor Judd. Irena consents to being psychoanalyzed by Judd, but she does not like him, noticing that he bears a coincidental resemblance to Serbian King John, slayer of “cat people.” For most of the film, the viewer never sees any direct confirmation of Irena’s superstition, though Irena does have a brief encounter with a strange woman who seems to know her, even though the stranger never appears again. The viewer soon learns that Doctor Judd is not a selfless representative of his profession, but his ulterior plans lead him to re-enact the battle of King John and the panther—but to Judd’s detriment, since only here does one see the superstition confirmed.

Many critics have claimed that the indirect Lewton approach proves scarier than the direct approach of most Universal horror-films. I find CAT PEOPLE psychologically interesting, but not frightening, even in the vaunted “swimming pool” scene. But the film does deserve its reputation for attempting a new approach in American horror cinema.

Posted by Gene Phillips at 1:08 PM
Email ThisBlogThis!Share to TwitterShare to FacebookShare to Pinterest
Labels: the marvelous