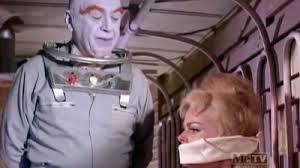 “The Devil’s Fingers” and “Hizzoner the Penguin” provided the second season’s high points. There were one or two above-average episodes to come, but there were more episodes that were mediocre or pointlessly absurd.

“Green Ice,” Max Hodge’s second outing with Mister Freeze, proves one of the mediocre ones. Though the actor who plays Freeze is no longer the same, Hodge’s script does make a few attempts to give the icy evildoer some of the same traits seen in “Instant Freeze.” The first Mister Freeze wanted to put the Dynamic Duo through a series of defeats before killing them, and one strategy included the creation of mass confusion by unleashing doubles of Batman and of Mister Freeze upon Gotham. This time, the most interesting aspect of Freeze’s scheme is that he seeks to sully Batman’s reputation. One part of the scheme involves persuading the gullible Gotham press that Freeze is paying off Batman to gain immunity, and in another angle, Freeze has impostor-versions of Batman and Robin show up at a swanky party (at Wayne Manor, no less), so that the “heroes” seem to be deliberately incompetent. Once again, many Gothamites are seen as being all too eager to turn upon the heroes, even though Batman is almost saintly in his forbearance toward the yellow-dog journalists.

Freeze’s big score, however, is more or less tossed into the episode’s second part, in that he threatens to send all of Gotham back into the ice age. Though the viewer does see the villain turn Commissioner Gordon’s office into an icebox, nearly extirpating both Gordon and O’Hara, the episode never gets around to demonstrating that the cool cruel criminal can actually carry out his threat. In a similarly unsatisfying B-plot, Freeze also kidnaps beauty queen Miss Iceland with a harebrained scheme about makig her into “Mrs. Freeze.” Despite the fact that Freeze was changed by a sudden immersion in dangerous chemicals, for some reason he seems to believe that he can gradually convert Miss Iceland into a being like himself by gradually exposing her to greater degrees of cold. Although the beauty queen is given a modicum of courage, repeatedly telling the villain to return to his frozen hell, the B-plot isn’t any more compelling than the A-plot.


Otto Preminger replaced George Sanders in the role of the frosty fiend. Bald-headed, huge-eyebrowed Preminger is the most imposing of the three actors to play Freeze on the series, but the actor performs the part as if he thinks everything is a big joke, lacking any of the emotional tone of Sanders’ rendition. And whoever thought it was a good idea for Freeze to repeatedly claim that everything happening was “Wild” was wildly mistaken, since the catchphrase makes Freeze sound like a looney bird.

The episode’s best camp moment appears when a little boy, convinced that Batman has turned bad, stands in front of a Batman-portrait and says, “Boo, Batman.” Bruce and Dick happen to be present, and Bruce aggrievedly claims that nothing in the world ever hurt him as much as “that little boy’s boo.”

Posted by Gene Phillips at 11:59 AM
Email ThisBlogThis!Share to TwitterShare to FacebookShare to Pinterest
Labels: combative adventures, the marvelous