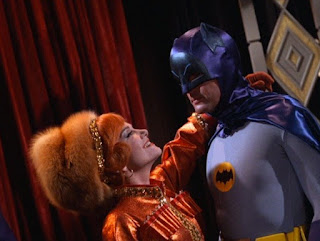 Olga, Queen of the Bessarovian Cossacks, isn’t much of a supercrook, but she’s a decided improvement over the character Anne Baxter played in Season One: Zelda the Not-Close-to-Being-Great. At least with Olga, Baxter has the chance to render a lot of exaggerated line-readings in a standard phony East European accent, so by herself she qualifies as a “clever-zany.” Unfortunately, in all of her appearances she’s teamed with Egghead (Vincent Price), and by her proximity a decent camp-style villain falls into the trap of being a dumb-zany antagonist.

Technically this is one of two segments of a two-parter, though they’re written with very little connection to one another. Allegedly Stanford Sherman meant to write one single-part episode with Olga and Egghead, which would have ended with the events of the second part, entitled “How to Hatch a Dinosaur.” But once Sherman was allowed to expand the one episode into two segments, he came up with a decent opening scheme for Egghead and his somewhat fickle ally. The villains kidnap Commissioner Gordon, and for ransom Egghead demands that every citizen must pay a tax on every egg consumed in Gotham. This conceit gives Stafford Repp one of his few decent scenes in the season. Chief O’Hara goes into a diner for breakfast, and the arrogant Egghead shows up, demanding that the chief should order nothing but eggs for his meal.

Batgirl is naturally perturbed by her father’s abduction, but Batman and Robin pursue a different course to foil the villains: checking out the local Bessarovian Embassy, where they suspect that Olga will seek to shore up her claim to her country’s throne by stealing “the Silver Samovar of Genghis Khan.” The Duo hides in the big samovar, but Olga mousetraps them, and when Batgirl follows, the villains get her as well. Olga plans to make borscht out of Batgirl, Robin and Gordon, but she considers making handsome Batman one of her husbands, much to the displeasure of Egghead. Adam West shows appropriate dread at the thought of being married to such a voracious female, but he’s spared the fate worse than death by a last-minute save from Alfred, who’s only present because of Batgirl The bad guys get away thanks to one of Egghead’s weapons, and by itself this would not be one of the worst of the dumb-zanies.

Unfortunately, in part two Egghead comes up with a resoundingly stupid plan, stealing both a radioactive isotope and a giant dinosaur-egg. He has the idea that he can irradiate the egg and bring the dino, a so-called “Neosaurus,” to life—whereon he will somehow tame the dino and use it to kill Gotham’s trio of costumed crimefighters. Batman, Robiu and Batgirl show up at the villains’ hideout, planning to foil their scheme. Then, for no obvious reason, Batman just disappears from the story, and the other two heroes beard Egghead in his lair. Egghead’s forces overwhelm the duo, agt which point the giant egg breaks open, and out comes a bipedal dinosaur. Egghead makes a weak attempt to “sic” the creature upon the heroes, but when the dino roars at him, he, Olga and the Cossacks all run out of the building, into the waiting arms of the police.

Then, as Robin and Batgirl prepare to conftont the snarling creature, it pulls off its head, and, Holy Improbability, it’s Batman inside a dino-suit. Maybe Sherman thought this nonsense would appeal to the kids who watched the show, but only the dumbest children would not have wondered (1) how Batman got into a dino-egg without anyone noticing, and (2) why he didn’t bother to inform Robin and Batgirl of this lamebrain ploy. He does give a reason as to why he chose this avenue of crimfighting: that he wanted to prevent a big fight so that none of the Cossacks would be hurt! Despite some of Sherman’s superior work on other episodes in the series, in this one he was clearly “writing on fumes.”

Posted by Gene Phillips at 1:39 PM
Email ThisBlogThis!Share to TwitterShare to FacebookShare to Pinterest