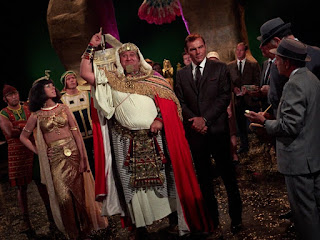 n an early scene of this one-parter, Stanley Ralph Ross does provide a line reminiscent of the best campy asides of the first two seasons. Bruce and Barbara are seen riding in a limo as both talk about the concert they took in on what sounds like a very decorous (and boring) first date, as Barbara states, “There’s nothing I like better than hearing ‘Lady of Spain’ played eight times.” Regrettably, there are no other lines as good as that one, though at one point, Batman asks his butler, “What’s it all about, Alfred?”

Once again, King Tut (Victor Buono) has reverted from eminent Yale professor to ancient Egyptian despot. However, instead of committinig crimes this time, Tut seeks to win over Gotham by convincing its citizens that his prophetic powers enable him to predict crimes before they occur. Batman and Robin are obliged to shore up Tut’s reputation by personally foiling one of the crimes. It will come as no surprise that Tut sets up all the crimes he predicts with his hirelings, but there’s a method behind his machinations. While the Dynamic Duo are busy fighting a gang of crooks, one of them slips a homing device on the Batmobile. Thus the robed rapscallion actually succeds at the goal sought by many of his peers: he tracks the device’s signal to the Batcave, and correctly deduces that the heroes are Bruce Wayne and Dick Grayson. However, the crimefighters cleverly contrive events so that no one believes Tut’s assertions.

Batgirl, who was sometimes allowed to overshadow the Dynamic Duo at times, doesn’t have as much to do this time. Sadly, though Buono chews the scenery as well as ever, Ross doesn’t write him any lines worthy of his mouth.

Posted by Gene Phillips at 1:33 PM
Email ThisBlogThis!Share to TwitterShare to FacebookShare to Pinterest