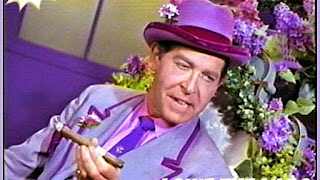 Mlton Berle played a bit role as a guard in the first-season episode “The Greatest Mother of Them All,” and his few minutes as a guard prove a better use of screen-time that both of his episodes as a dumb-zany supercrook. Dwight Taylor has the honor of creating the third season’s first really execrable guest villain, though even Louie the Lilac may not be the “Lamest Villain of Them All.”

For no particular reason, Louie and his hoods all dress like 1940s gangsters, complete with flowers in their lapels, which image possibly suggested the idea of a fiend with a flower-fetish. Despite looking like the times have passed him by, though, Louie intends to gain a stranglehold on the future, by getting in good with Gotham City’s community of “flower children,” a gaggle of clean-looking youths—never called hippies—who hang around one of Gotham’s parks, assembled around their spiritual leader Princess Primrose. Louie’s plan to somehow gain control over the love generation for some unspecified profit makes even less sense than Penguin’s plan to marry the police commissioner’s daughter.

As it happens, though, Primrose was once a college-buddy of Barbara Gordon, thus giving Barbara a personal reason to nose around. Louie doesn’t like snoops and sends a thug to Barbara’s apartment to abduct her. This leads to an incredibly time-wasting scene in which the thug breaks into the apartment, Barbara hides in another room while changing into Batgirl, and then drives the thug away simply by stepping into the room. Maybe the thug’s heard about her killer kicks, but he acts more confused than fearful. I imagine most viewers evinced a similar confusion, though more in the nature of “What is all this crap?”

Meanwhile, Batman and Robin find their way to Louie’s hothouse-hideout, and he traps them by feeding them to his giant carnivorous plant (not much of a death-trap, but a distinct improvement over the giant tea-bags of ‘Enter Batgirl.”) The crusaders manage to rescue themselves before Batgirl arrives and all three trounce the thugs in a slightly better-than-average fight—if one ignores the silliness in which Batgirl immobilizes Louie by dousing him in a mildewing solution. Sadly, Louie and his floral foolery would return for an encore than nearly no one wanted.

Posted by Gene Phillips at 1:37 PM
Email ThisBlogThis!Share to TwitterShare to FacebookShare to Pinterest