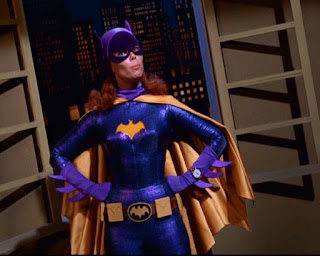 BATMAN ’66 entered its third and final season by getting cut back to one episode per week. This didn’t entirely preclude multi-part stories, since the season included one three-parter and four two-parters. But for the most part the show’s writers never seemed to figure out to make “camp Batman” work in this scaled-down structure. Even budget cutbacks and the addition of a third starring character never hurt the program as much as the restrictions on time. Perhaps as a substitute for witty banter, the episodes begin emphasizing pure zaniness, not unlike the turn Batman comics took in the late 1950s and early 1960s, with characters like Bat-Hound and Bat-Mite. Only a few episodes escaped the Zaniness Curse, though even the victimized episodes can be divided into “clever-zanies” (showing at least a little imagination) and “dumb-zanies” (showing the writers tossing out silliness to cover thin scripting).

Stanford Sherman’s “Enter Batgirl” is certainly one of the dumb-zanies. The story introduces the Commissioner’s daughter Barbara Gordon, but the action barely strays either from the young woman’s apartment or a neighboring apartment—patently a money-saving strategy. Penguin (Burgess Meredith) takes up residence in the room adjoining Barbara’s so that he can more easily kidnap her and force Barbara to marry him. The villain thinks that becoming the Commissioner’s son-in-law via a forced marriage will somehow immunize him from the law, which ranks as the Penguin’s most bird-brained plot during the series. Having captured Barbara, Penguin can’t resist boasting to the Commissioner, which gets Batman and Robin on his trail. In addition, the supercrook sends his goons to kidnap a minister. The goons instead abduct Alfred, who substitutes himself for the minister, and though Pengun has met the Wayne butler on two previous occasions, the villain is utterly fooled by the deception.

Alfred then bears witness to Barbara Gordon displaying some un-ladylike behavior as she escapes via a window to get to her neighboring apartment. Therein she’s built her own “Batgirl-cave” with her costume and various pieces of equipment, and she transforms into Batgirl for the first time ever, bent upon fighting crime like Batman for undisclosed reasons. Just as Batman and Robin invade Penguin’s apartment and come to grips with the cagey bird, Batgirl shows up and joins the fight. Penguin gets away with one of his many devices, only to return to the same location once more a little later. He mousetraps the Dynamic Duo and puts them in a cut-rate death-trap (giant tea bags!), but Batgirl rescues them and foils the evildoers. Later she makes Alfred into her confidante, even though technically he never witnessed her becoming Batgirl.

As would happen in many other episodes, Batman and Ronin don’t have that much to do, and Penguin doesn’t get more than one or two strong lines of dialogue. On the plus side, Batgirl’s character is suitably courageous, an attribute not seen in other females in the series. The new setup with Alfred—where he must afeguard both the identities of the Duo and of the new hero in town—works to give Alan Napier a lot more comic business in this season, which is a titanic improvement after such Season Two inanities as “Cousin Egbert” and “the Alf-Cycle.”

Posted by Gene Phillips at 3:21 PM
Email ThisBlogThis!Share to TwitterShare to FacebookShare to Pinterest