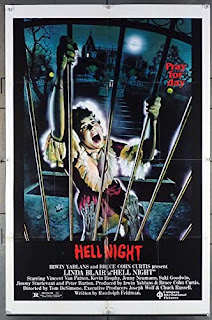 HELL NIGHT is a lively if somewhat inconsistent blend between the slashers of the early eighties and the “killer in the haunted house” trope that arose in the 1930s and arguably flowered in the 1960s.

Rather than using the name of a holiday like HALLOWEEN, the fulmmakers build their story around an adolescent ritual: that of college fraternities and sororities putting pledges through “hell” to qualify for admission. Four pledges—Seth, Denise, Jeff and Marti (top billed Linda Blair)—allow themselves to be locked into a vacant mansion. Seth and Denise plan to use the hazing-ritual as an excuse to have sex and drugs, while Jeff and Marti are more reserved representatives of adolescence. (Marti, in addition to sporting a name with dominant male associations, is atypical in being versed in auto repair, though she’s not portrayed as being especially unfeminine.) Three “hazers” lurk outside the mansion, planning to hassle the pledges, but all the youths become targeted by two madmen secretly living therein. Most of the collegians are wiped out but Blair’s character gets the honor of being an early “Final Girl” while the two murderers are slain.

Though the college-kids are given some decent lines of dialogue, they’re still vapid characters. There’s a big character shift for fun-and-games Seth, in that he briefly escapes the mansion grounds to summon the cops. Unable to convince the constables that he’s not playing a frat-prank—one of the film’s best scenes—Seth takes on a heroic attitude by charging back to fight the killers again. But the transformation isn’t convincing.

HELL NIGHT’s most interesting aspect is the backstory of the mansion. Before the pledges are locked in, a frat-boy informs them that the domicile’s former occupants, the Garths, consisted of a husband and wife who bore two sons and two daughters, all of whom were developmentally challenged in some way. Supposedly Old Man Garth slew his wife, three of his children, and himself, leaving only one survivor, Andrew Garth—though Andrew somehow escaped the custody of the state. For most of the movie, the audience is led to assume that Andrew has remained hidden in the mansion for years, and that he alone launches the murderous (though not very bloody) assaults on the collegians. Then, late in the film, the writer tries to spring a surprise on the viewer by revealing that Andrew’s brother Mort also survived and has been helping with the killings. This “surprise” allows the students to think that they’ve triumphed over a killer, only to have another waiting in the wings—but given the earlier story about the Garth family, the revelation feels like a cheat. In addition, both Garths appear as nothing but shadowy, hulking figures—the actors playing them don’t even receive billing—so there might as well be just one, since they’re virtually identical. The murders are largely pedestrian until the memorable big finish, where Final Girl Marti manages to slay her attacker in an inventive manner worthy of Laurie Strode.

Posted by Gene Phillips at 11:33 AM
Email ThisBlogThis!Share to TwitterShare to FacebookShare to Pinterest
Labels: freakish flesh (u), perilous psychos (u), the uncanny