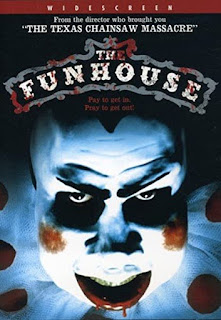 Due to the period in which THE FUNHOUSE debuted, the film, Tobe Hooper’s third directorial effort, often gets lumped in with the slashers of the period. But though Larry Black’s script includes a few acknowledgements of the slasher-craze, the film bears greater resemblance to Hooper’s previous two examples of “rural horror.” The story starts off in suburbia—a frequent setting for many slashers. Yet that haven has been figuratively invaded by a traveling carnival. This "Carnival of Terror" (so termed in an alternate title for the film) plays host to the titular funhouse and its ruthless human inhabitants. Thus the carnival is in effect the “star of the show.”

An opening scene in the home of teenaged Amy, our viewpoint character, seems to be both evoking and refuting the opening of the film that launched the slasher-craze, John Carpenter’s HALLOWEEN, not to mention, more jokily, Hitchcock’s PSYCHO. Amy’s first seen taking a shower, but the camera cuts to show us a weird figure, face unseen, entering a room full of torture-implements. The stranger enters the bathroom and flings open the shower-door, and the viewer sees the grotesque mask he wears, just before he stabs Amy in the stomach—with a rubber knife. Then the camera pulls back enough to let us see that he’s a kid, roughly the same age Michael Myers was for his first murder. Once she's over her momentary shock, Amy tells little brother Joey that she plans to get back at him for this prank (though she never does so). In later scenes it’s clarified that Joey’s room is full of fake horror-implement, which makes the character something of a stand-in for hardcore horror fans. Black’s script suggests a correlation between the “safe” commercial horrors Joey devours and the “real” horrors of life with which Amy and three of her friends will soon confront.

That night Amy goes out on a four-person date, consisting of her, her gal-pal Liz, and their respective escorts Buzz and Richie. The outing also has the potential to be a transition-point for Amy, in that Liz is encouraging Amy to “give it up” to the burly Richie. It’s Richie who suggests that the group should take in a visiting carnival instead of a mundane movie, and the others acquiesce. Unbeknownst to any of them, kid-brother Joey decides to shadow them, apparently hoping to get an advance taste of adolescent mating-rituals. In his function, though, Joey is just a source of “false scares.” The boy never really experiences the Terror of the Carnival and ends up being sent home to his parents, since, despite his gory tastes, he really is just a kid.

The four teens take in the sights of the carnival as if they have no more reality than Joey’s horror-movies. Some of the sights are animatronic men and women who laugh or scream eerily—indeed, these crude simulacra are seen both in the opening credits and at the film’s conclusion—while other "attractions" are biological freaks, like a two-headed cow. Thus Black’s script confrontss living teenagers with two parodies of normality, and though the carnival is run by hardened professionals, such as the barker Conrad, the sleazy fairground becomes a figurative crossroads for those old friends, Sex and Death.

The four teens decide to plumb the carnival’s secrets by hiding on the grounds after the shows have all closed and the other patrons have left (except Joey, who copies the teenagers' actions). Joey, though, does not see what the transgressing teens do: an attempt at Sex that ends in Death. Gunther, a man wearing a Frankenstein’s Monster mask solicits sex from the aging lady fortuneteller, and though she accepts, she mocks him and he kills her. From then on the teens desperately seek to escape the menace of Gunther—whose mask conceals real horror, that of a distorted freak of nature—and his father Conrad, both anxious to wipe out the witnesses. Joey, not being one of these, gets sent home, but three of the four teens fall victim to the diabolical devices of the carnival’s Funhouse. Amy, an early candidate for the role of “Final Girl,” ends up being the last survivor of the chaos, forced to confront the half-mad monster in the heart of the Funhouse—though the relentless mechanical menaces therein play no favorites. Thus Gunther, despite being born to dark ways of the carnival, perishes while the traumatized teen lives on.

Though none of the teens are deeply characterized, the actors make them relatable enough that they don’t just seem like cannon fodder. John Beal’s score emulates the driving, repetitious music of the carny, underscoring the raucous gibbering of the animatronic figures so that they seem not unlike demons in hell mocking new arrivals.

Posted by Gene Phillips at 2:29 PM
Email ThisBlogThis!Share to TwitterShare to FacebookShare to Pinterest
Labels: diabolical devices (u), freakish flesh (u), perilous psychos (u), the uncanny