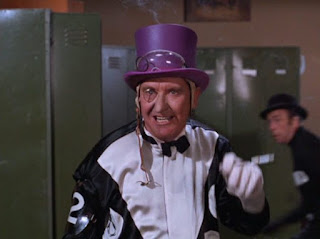 This time the Penguin’s big score at least makes sense as a moneymaking venture. He teams up with Lola Lasagna (Ethel Merman), a horse-owing celebrity whom Penguin knew in her days as a crooked type. The two ne’er-do-wells plot to fix a horse race by doctoring up a ringer to take the place of the favorite in an upcoming contest (sponsored, as almost everything in Gotham is, by Wayne Enterprises). As a visual counterpoint to Penguin and his umbrellas, Lola parades around most of the time with a parasol, and even uses the name Parasol for her horse. However, she’s an extremely minor character, and even an actress more skilled than Merman couldn’t have done anything with Lola.

Despite a better motive this time around, Hoffman constructs the plot poorly. Penguin first appears at Barbara Gordon’s library, though he doesn’t seem to know in advance that she works there. His primary purpose is to abscond with a priceless book about collectible parasols, but Barbara easily chases him away. Later Hoffman’s script laboriously sends Penguin back to the library again, in part to attempt vengeance on the woman who rejected him as a husband, but the clumsy repetition of the same set makes it seem as if the filmmakers were trying to get their money’s worth out of the new locale. Like most multi-parters of the season, there’s no death-trap at the end of the first segment, though Penguin does manage to glue Batman and Robin to the seats of their own Batmobile.

Part Two at least provides a novel new locale, since it isn’t enough for Penguin to fix the race, he has to ride in it as well (which development alone makes this into one of the dumb-zanies, given that Burgess Meredith would not have made a credible jockey under any circumstances). The episode’s only high point is that Alfred is obliged to use his special knowledge of Batgirl’s identity—though without disclosing it to anyone-- in order to line her up to ride in the race against Penguin. Neither the race nor the concluding fight is anything special, and no one gets any standout lines of dialogue.

Posted by Gene Phillips at 1:30 PM
Email ThisBlogThis!Share to TwitterShare to FacebookShare to Pinterest
Labels: combative adventures, the marvelous