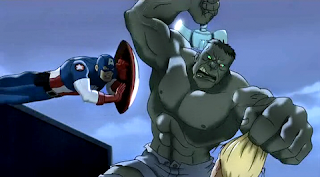 I’ve read very few of Marvel Comics’ “Ultimates” line, and none of the ones I did read included any of the Avengers iterations. My partial impression of the line was that the imprint, which gave its creators the chance to “re-imagine” classic Marvel characters with different continuities, was not much more than putting old wine in modern-looking bottles. ULTIMATE AVENGERS is said to have only a loose connection to its comic book source, but nothing about the OAV makes me think the original had any marks of distinction, beyond putting forward some of the concepts and motifs that were used in the MCU’s live-action movies.

In ULTIMATE the superspy Nick Fury becomes the midwife of the Avengers, as he seeks to unite a group of individual superheroes in order to counter an alien threat. Fury’s wish list does not include the Hulk, who has built up his usual rep for mindless rampages. Yet as the story opens the Hulk is temporarily under control by his alter ego Bruce Banner, who keeps the big green guy suppressed with drugs, and who even works as a scientist for Fury’s organization SHIELD. (In this capacity Banner is joined by his sometime girlfriend Betty Ross, also a scientist in this re-imagining.) Fury does want to use the newly reborn WWII hero Captain America to lead the supergroup, but none of the other heroes seem enthusiastic. Iron Man, whose secret identity is not yet known to anyone else, ignores Fury’s overtures. So does Thor, who has apparently been exiled to Earth from Asgard and who spends his time helping out Greenpeace-like protesters. The Wasp is somewhat more approachable, but her partner Giant-Man has had some acrimonious relationship with Fury and rebuffs the first overture. Only the Black Widow seems entirely comfortable working for Fury, though the viewer never knows anything about her except that she has a Russian accent.

Eventually Fury manages to enlist the heroes into investigating the incursions of an alien race, the Chitauri. (These one-dimensional extraterrestrial evildoers were created for the Ultimates imprint and would later accrue greater fame for their role in the 2012 AVENGERS movie.) However, the aliens—who would appear in the one animated sequel to this film—immediately take a back seat to the Hulk’s forceful “audition” for team membership. Unbeknownst to Fury, Banner has been working on a secret project, aimed at nullifying the threat of the Hulk by infusing the monster with his own intelligence. The process works for a time, long enough for the green-skinned goliath to join the other heroes and to stamp out one contingent of invaders. However, the Hulk soon reverts to savagery and the heroes spend the rest of the film subduing the monster. There’s no final reconciliation that makes it feasible for the Hulk to become a member of this rather shaky association, though reportedly he’s on board for the film’s only sequel.

Banner and Captain America get the only character arcs, but both are pedestrian, and thus don’t register much better than the utter absence of characterization for the other heroes. Thus, the only selling points for the video are the fight-scenes, which are adequate but unremarkable. The cartoon’s only significance is as an example of what not to do in crafting an origin for the Avengers, and fans can be pleased that the producers of the 2012 live-action film did not derive anything but a few minor elements from this subpar outing.

Posted by Gene Phillips at 1:49 PM
Email ThisBlogThis!Share to TwitterShare to FacebookShare to Pinterest
Labels: combative adventures, the marvelous